Japanese American activist Yuri Kochiyama is being honored with a Google Doodle on what would have been her 95th birthday.

Kochiyama died in 2014 in Berkeley, California.

1. She Was Born in California & Spent 2 Years in an Internment Camp During World War II

Yuri Kochiyama was born Mary Yuriko Nakahara on May 19, 1921 in San Pedro, California. Her parents were Japanese immigrants, Seiichi Nakahara, an entrepreuner and fismerchant and Tsuyako Nakahara, a college-educated homemaker and piano teacher.

She went to San Pedro High School and Compton Junior College, where she studied English, journalism and art, graduating in 1941.

Yuri Kochiyama's 95th birthday today … here's a portrait I took of her in 2002 for the East Bay Express. pic.twitter.com/b00UA9mHy9

Her father was taken into custody shortly after the Pearl Harbor attacks because he was suspected of being a national security threat, according to the New York Times. He was ill, and was held in federal prison. He died a day after he was released from prison on January 20, 1942.

After his death, Kochiyama, her mother and brother were then taken into the Santa Anita Assembly Center, where they were held for several months, according to the Times. They were then moved to an internment camp in Jerome, Arkansas.

Kochiyama was moved in 1944 to help run a USO center for soldiers in Mississippi, according to the Los Angeles Times. It was there where she met her husband, Bill Kochiyama, who was in the U.S. Army as a member of the 442nd Regimental Combat Team, which was made up of mainly Japanese American soldiers.

The couple married in 1946 and moved to Harlem, New York, after the war. They had six children together.

Kochiyama died in her sleep in 2014, her family said. She was survived by her four living children, Audee, Eddie, Jimmy and Tommy, along with their spouses, nine grandchildren and five great-grandchildren.

“Life-long activist Yuri Kochiyama passed away peacefully in her sleep in Berkeley, California on the morning of Sunday, June 1 at the age of 93. Over a span of more than 50 years, Yuri worked tirelessly for social and political change through her activism in support of social justice and civil and human rights movements,” her family said in a statement.

2. She Became an Activist Alongside Malcolm X & Held Him in Her Arms After He Was Shot in 1965

After moving to Harlem, New York, Yuri Kochiyama became a civil rights activist, according to a biography posted by her family on the Facebook page “Remembering Yuri Kochiyama.”

“Yuri’s activism started in Harlem i the early 1960’s, where she participated in the Harlem Freedom Schools, and later, the African American, Asian American and Third World movements for civil and human rights and in the opposition against the Vietnam War,” her family said.

Kochiyama met Malcolm X in 1963 and they became friends, working alongside each other in the Organization of Afro-American Unity.

She talked about meeting Malcolm X in an interview with Democracy Now! in 2008:

I felt so bad that I wasn’t black, that this should be just a black thing. But the more I see them all so happily shaking his hands and Malcolm so happy, I said, “Gosh darn it, I’m going to try to meet him somehow.” And so, I kept getting closer, and I said, “If he looks up once, I’m going to run over there and see if I could shake his hand.” And so, that’s what I did.

There was a time where — maybe he didn’t look up, but I may have just thought he did or wished he did. And so, then I yelled and said, “Malcolm, can I shake your hands, too?” because all these young people were. And he said “What for?” And I didn’t know at first what to say. “What for?” I said, “Because what you’re doing for your people.” And he said, “And what am I doing for my people?” Now, I thought, “What would I say to that?” And so I said, “You’re giving directions.” And then, he just changed and said — he came out of the center of that, you know, where everybody was there, came out and he stuck his hands out. So I ran and grabbed it. I couldn’t believe that I was shaking Malcolm X’s hand.

Kochiyama was with Malcolm X when he was assassinated, and held him after he had been shot.

Her family says she worked “for racial justice and human rights. Over the course of her life, Yuri was actively involved in various movements for ethnic studies, redress and reparations for Japanese Americans, African Americans and Native Americans, political prisoners’ rights, Puerto Rican independence and many other struggles.”

Kochiyama told the Los Angeles Times she “picked up his head and just put it on my lap. I said, ‘Please, Malcolm … stay alive.'”

3. She Took Over the Statue of Liberty With a Group of Puerto Ricans in 1977

Kochiyama was among a group of Puerto Ricans and other activists who took over the Statue of Liberty in 1977 in a protest to draw attention to the fight for Puerto Rican independence, according to the San Francisco Chronicle.

They demanded the release of five Puerto Rican nationalists convicted of attempted murder. Kochiyama and her cohorts occupied the monument for nine hours and then gave up peacefully.

Her biographer, Diane Fujino, told the San Francisco Chronicle, “To Yuri, one of the major problems in society is polarization; the other is racism. Opposing polarization takes on greater significance when one believes, as does Yuri, that social change comes through collective action.”

She suffered a stroke in 1997 and moved to Oakland to be closer to her children. She fought for prisoners’ rights in her later years.

“Do you know there are 2 million people in prison in America?” she said during a speech in 2005. “That’s almost a country. The treatment of prisoners is so bad that Abu Ghraib has nothing on places like Corcoran and San Quentin.”

Kochiyama and her husband were among the Japanese Americans to fight for reparations and a government apology for the way they were treated during World War II.

Their efforts helped lead to Congressional approval of a plan to pay $20,000 to the 60,000 surviving internees in 1988, the New York Times reported.

“Yuri leaves behind a legacy of courage and strength, and her lifelong passion for justice and dedication to civil rights continue to inspire young AAPI (Asian American and Pacific Islander) advocates today,” said Kiran Ahuja, executive director of the White House Initiative on Asian Americans and Pacific Islanders in 2014. “I am moved by her leadership and her unwavering commitment to building coalitions to improve the quality of life and opportunities for all Americans, regardless of background. … The contributions of Yuri Kochiyama and other civil rights champions inspire us to ensure that all Americans reach their fullest potential regardless of who they are or where they come from.”

5. She Said She Admired Osama bin Laden & Praised His Hatred of the U.S. Government

Kochiyama said in a 2003 interview that Osama bin Laden is “in the category of … all leaders that I admire.” (AFP/Getty)

While many have celebrated Kochiyama for her activism, she is controversial and does have detractors, angered by her radical beliefs and statements in support of terrorists and convicted killers. Some of those detractors have lashed out at Google, angry for the decision to recognize Kochiyama with a Doodle.

One of her most controversial statements came in 2003, when she talked about Osama bin Laden in an interview with Los Angeles IndyMedia:

… I consider Osama bin Laden as one of the people that I admire. To me, he is in the category of Malcolm X, Che Guevara, Patrice Lumumba, Fidel Castro, all leaders that I admire. They had much in common. Besides being strong leaders who brought consciousness to their people, they all had severe dislike for the US government and those who held power in the US. I think all of them felt the US government and its spokesmen were all arrogant, racist, hypocritical, self-righteous, and power hungry.

She said freedom fighters around the world support bin Laden and “revere” him:

And today, when I think what the US military is doing, brazenly bombing country after country, to take oil resources, bringing about coups, assassinating leaders of other countries, and pitting neighbor nations against each other, and demonizing anyone who disagrees with US policy, and detaining and deporting countless immigrants from all over the world, I thank Islam for bin Laden. America’s greed, aggressiveness, and self-righteous arrogance must be stopped. War and weaponry must be abolished.

Kochiyama has also been criticized by some for her support of prisoners jailed for crimes, including murder, whom she viewed as political prisoners. She supported Mumia Abu-Jamal, who was convicted in the killing of a Philadelphia police officer.

She also was friends with Assata Shakur, who was convicted of killing a New Jersey police officer and later escaped from prison, and Marilyn Buck, who was imprisoned for helping Shakur escape, and for her roles in the 1981 Brink’s robbery and the U.S. Senate bombing in 1983. 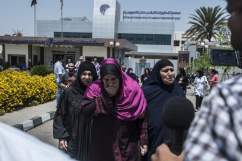 Loading more stories
wpDiscuz
0
0
Would love your thoughts, please comment.x
()
x
| Reply
Yuri Kochiyama, a Japanese American activist, is being honored with a Google Doodle on what would've been her 95th birthday. Here's what you need to know about her.