Kathy Shelton of Springdale, Arkansas, is now 54 years old. But in 1975, at the age of 12, Shelton was allegedly raped by a 41-year-old factory worker named Thomas Alfred Taylor. The lawyer who provided Taylor’s defense was a 27-year-old law professor who ran a legal aid clinic for underprivileged defendants. Her name was Hillary Rodham, soon to be known as Hillary Clinton — and in the end, Taylor’s charges were reduced from first-degree rape to “unlawful fondling of a child under 14,” mainly due to a lack of credible evidence in the case. Taylor served 10 months of a one-year sentence, and died in 1992.

The Shelton rape case has long been used by Clinton adversaries to attack her, saying that her defense of Taylor makes her a hypocrite when she claims to be an advocate for women and sexual assault victims. Clinton’s political opponents have even claimed that the Democratic Presidential nominee “laughed” when discussing the case in an interview several years later.

With Donald Trump signaling that he intends to attack Clinton as a “bully” toward victims of sexual assault, the Shelton rape case is expected to be a topic in the second Presidential debate on Sunday, October 9, according to Bloomberg News reporter Joshua Green.

19. So if you wonder how things could get worse for GOP (+ America), litigating rape of 12 y.o. in a presidential debate may be the answer.

What really happened in the controversial Shelton case? Here’s what you need to know.

Shelton never came forward publicly until 2016, when she gave an interview to Britain’s Daily Mail newspaper. In fact, Shelton did not realize that Taylor’s defense lawyer had been Clinton until 2008, 33 years after the case, when the New York newspaper Newsday ran a lengthy story about the case, and Clinton’s role in it.

What actually happened that night remains unclear, mainly because — according to the Washington County Sheriff’s Office — the original case files have been lost. Newsday in 2008 pieced together what remains the most complete account of the incident, but even that paper’s report described the case as “convoluted” and reliant on the testimony of three witnesses, who were each unreliable and had something to hide. An investigator told Newsday that Shelton’s own story contained “serious inconsistencies.”

According to the Newsday account written by reporter Glenn Thrush, the girl — not named in the story but now identified as Shelton — was sleeping over at a friend’s house when, around midnight, Taylor and another man, his cousin, came by the house and offered to take her for a ride in their pickup truck. Saying she wanted to buy a soft drink, the girl got in the truck.

They drove around and picked up a 15-year-old boy. According to the Newsday account, Taylor then stopped at a liquor store where he bought whiskey and Coke, giving the drink to the 12-year-old. Later, in the early hours of the morning, they drove to a secluded area where Taylor and the other man left the truck for a walk. The 15-year-old told police that he then had sex with Shelton.

After the act was concluded, the boy said that he got out of the truck — and Taylor got in. That’s when according both to Shelton and witnesses, as well as doctors who examined her a short time after the incident, Taylor raped her. He also beat her during the rape, she said.

Taylor denied raping the 12-year-old, and even passed a polygraph test, which Clinton said in her later interview “forever destroyed my faith in polygraphs.”

2. Clinton Did Not “Volunteer” for the Case, She Tried to Get Out of Defending Taylor

Bill and Hillary Clinton on their wedding day, 1975. pic.twitter.com/2ZRvQLEsc6

Because the legal aid clinic provided representation for clients who could not afford a lawyer, in the frequent instances when public defenders could not handle their heavy caseload.

When Taylor told the judge in his case that he demanded a woman lawyer, firing his court-appointed male attorney, prosecutors turned to Rodham, recommending her to the judge in the case.

Clinton wrote about the case in her 2003 memoir Living History, saying that she desperately tried to get out of the assignment.

“I really didn’t feel comfortable taking on such a client, but (Prosecutor) Mahlon (Gibson) gently reminded me that I couldn’t very well refuse the judge’s request,” Clinton wrote.

Gibson, in a CNN interview 11 years after Clinton published her book, remembered the young lawyer’s reaction the same way.

Gibson suggested that she take her pleas to the judge, which Clinton did. But the judge was unsympathetic, ordering her to take Taylor’s case.

Once she no longer had a choice in the matter, Clinton said in a 2014 interview that she had a professional obligation to give Taylor the strongest possible defense.

“I had a professional duty to represent my client to the best of my ability, which I did,” she said.

Gibson recalled that the young lawyer worked overtime on the case in hopes of impressing the court, which might them help establish the reputation of her new legal aid clinc.

Even though she found the job distasteful, Rodham mounted what she felt was her strongest possible defense of Taylor. As Newsday reporter Thrush wrote in 2008, “Her approach, then and now, was to immerse herself in even unpleasant tasks with a will to win.”

In an affidavit that can be read in the court file above, starting on page 34 — or at this link — Rodham attempted to undermine the credibility of 12-year-old’s allegations against Taylor, writing that she had “been informed” that the victim, now known to be Shelton, “is emotionally unstable with a tendency to seek out older men and engage in fantasizing.”

She also said that she had been “informed” that the girl “has in the past made false accusations against persons, claiming they attacked her body.”

Finally, Rodham wrote that a child psychologist told her that “children in early adolescence tend to exaggerate or romanticize sexual experiences,” and that this tendency was especially common in children from “disorganized families” such as Shelton’s.

When Newsday interviewed her in 2008, Shelton said that she bore no “ill will” toward Clinton. But she has since changed her mind, at least partly because of a tape recorded interview that surfaced in 2014 in which Clinton is allegedly heard “laughing” while discussing the rape case. 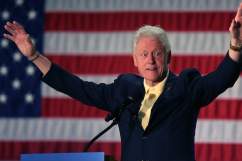 4. Clinton Laughed on the Tape, But Not About Taylor’s Light Sentence

In an interview conducted sometime in the mid-1980s by Arkansas reporter, Roy Reed, Clinton discussed the case. The audio recordings can be heard above. Clinton’s political opponents have claimed that she “laughed” while discussing the light sentence that Taylor received, and when she admitted that she knew he was guilty.

But that’s not true.

There are four moments where Clinton can be heard “laughing” during the interview. Here they are, as identified by The Washington Post.

•“Of course he [the defendant] claimed he didn’t [rape]. All this stuff. He took a lie detector test. I had him take a polygraph, which he passed, which forever destroyed my faith in polygraphs.” Clinton and Reed both laugh at this remark.

•“I handed it [information on her expert witness] to Mahlon Gibson, and I said, ‘Well this guy’s ready to come up from New York to prevent this miscarriage of justice.’” Both Clinton and Reed laugh, apparently at the irony of calling the case a “miscarriage of justice” when in Clinton’s opinion, her client was guilty.

•“So Maupin [ie. the judge] had to, you know, under law he was supposed to determine whether the plea was factually supported. Maupin asked me to leave the room while he examined my client so that he could find out if it was factually supported. I said ‘Judge I can’t leave the room I’m his lawyer!’ he said ‘I know but I don’t want to talk about this in front of you.’” Reed is heard saying, “Oh God, really?” and both laugh at the idea that the details of the case were not suitable to be discussed in front of a woman, even the defendant’s own lawyer.

At no point does Clinton laugh at mention of Taylor’s reduced charges and sentence, or at the notion that she defended a guilty client, which she determined to be her professional obligation.

“In the interview she called this a ‘terrible case,’ and it’s clear she is pained to recall it,” Clinton spokesperson Josh Schwerin told the Post. “The reactions that you mention were very clearly expressions of disbelief at breakdowns in the handling of the case and absurdities she encountered within the court system’s bureaucracy.”

Some of Clinton’s attackers have claimed that Taylor was found not guilty as a result of her defense. The truth his, the accused rapist pleaded guilty after prosecutors offered him a plea bargain, in which his charges were reduced to “fondling” rather than first-degree rape.

Why? While Rodham mounted an aggressive defense, in the end prosecutors decided there simply was not enough evidence to make the rape charge stick — because investigators mishandled it.

As a result, Taylor agreed to plead guilty to the lesser charge and was given a five-year sentence in county jail — but the judge suspended four years of the sentence and shaved another two months off the remaining year for time Taylor had already served in county jail.

Despite her statement in 2008 that she had nothing against Clinton, in her 2016 interview, Shelton said she was incapable of forgiving the lawyer who defended her alleged rapist.

“It’s put a lot of anger back in me,” said told the Mail. “Every time I see her on TV I just want to reach in there and grab her, but I can’t do that.” 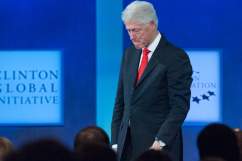