A 21-year-old Oklahoma woman could face felony murder charges after police say she set up a burglary at a home in Broken Arrow that led to the shooting deaths of three teens.

Elizabeth Marie Rodriguez turned herself in to police after the teens, Max Cook, Jacob Redfearn and Jake Woodruff, were shot dead by the homeowner’s son, 23-year-old Zach Peters, who armed himself with an AR-15 and gunned down the intruders Monday afternoon.

Rodriguez is being held without bail pending formal charges being filed against her. In addition to planning the burglary, police are accusing Rodriguez of being the getaway driver for the teens.

Felony murder charges can be brought against someone who commits a felony resulting in death in Oklahoma regardless if they actually kill someone, according to state law. Rodriguez was also arrested on three counts of first-degree burglary.

1. Rodriguez Told Police She Fled From the Scene After Hearing Gunshots While Waiting Outside

He armed himself with an AR-15 rifle and opened fire on the trio when he confronted them in a hallway after they briefly exchanged words, police said. Two of the burglars died in the home’s kitchen, while a third escaped to the driveway, where he collapsed and died.

“Preliminary investigation, it looks like it was self-defense,” Deputy Nick Mahoney told the news station.

The case could fall under Oklahoma’s “Make My Day” law, which says a resident has the right to use deadly force if an intruder has entered or is entering the resident’s home, the Tulsa World reports.

The Wagoner County District Attorney’s office will decide if charges are filed against Peters.

2. Police Say Rodriguez Knew Peters by Name & Brought the 3 Teens to the House to ‘Steal Items’

Rodriguez is being held in jail without bail pending formal charges. Her arraignment was delayed on Tuesday because the investigation is continuing. She was arrested on probable cause, but the “matter is still under investigation,” prosecutors said. 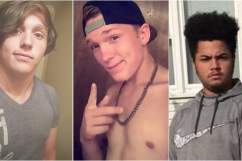 3. Rodriguez Was in a Relationship With One of the Slain Teens, Max Cook

Max Cook and Elizabeth “Liz” Rodriguez in a photo posted to Rodriguez’s Facebook page on March 19.

One of the teens killed, Max Cook, was dating Elizabeth Rodriguez, according to his Facebook page. It is not known how he knew the other two teens involved in the burglary. He was friends with Jacob Redfearn, but not Jake Woodruff, on Facebook.

According to his Facebook page, Cook went to Owasso High School and was from Owasso, Oklahoma. He lived in Tulsa.

Jacob Redfearn went to Collinsville High School and was a native of Collinsville, according to his Facebook page.

A teen who called himself an “old friend” of Redfearn wrote on Facebook, “it really sucks when someone makes one bad decision and their life is over with.”

John Thompson III continued, “He was always happy go lucky and always had a smile on his face even when he was down. R.I.P. and fly high buddy. Please watch over your brothers and your family. I know they taking it really hard right now.”

Thompson posted photos of Redfearn to his Facebook page and said Redfearn “was murdered” when someone asked who he was. Redfearn’s brother, Jordan, replied, “He wasn’t murdedhe made a bad decision that cost him his life unfortunately.”

Jaykob Woodruff was a student at Owasso High School, according to his Facebook page.

“So for everyone who wants to be negative about this needs to remember the sweet kind hearted boy,” his sister, Kendra, wrote on Facebook. “He would give you the shirt off his back no matter if it was cold outside. His friends meant the world to him no matter if they were good or bad. He was only 15. I know what he did was wrong I’m not saying it’s not but please be positive for his friends and family we love him and will always miss him.”

Keira Ellison wrote on Facebook that a candelight vigil will be held for the three teens on Friday at 8 p.m. at Owasso High School.

“Bring your own candle, everything else is provided,” she wrote. “Please absolutely no negativity.”

4. She Is the Mother of 3 Children & a Graduate of Ooloagh High School Originally From California

Elizabeth Rodriguez, who goes by Liz Rodriguez on Facebook and is named as Elizabeth Kohler in some public records, is the mother of three young children, according to her Facebook page.

She attended Ooloagh High School and is originally from Modesto, California, she says on Facebook.

In her “About Me” section, she writes, “?B.A.D?; Mommy to three little monsters; beautiful crazy disaster; living it day by day.”

5. The District Attorney’s Office Says It Is Waiting for a Full Investigation Before Filing Formal Charges

The District Attorney’s Office said formal charges could be filed by the end of this week or early next week.

“At that time there will be a final decision,” Thorp told reporters. “I know there’s questions that have been posed regarding ‘Stand Your Ground’ law as well as the application of the felony murder rule. We hope to hope to answers those questions with our formal filing decision when we reach that decision.”

Thorp said “there’s a lot of things to look at in this case.”

When asked about possible charges against Peters, Thorp said, “at this time, all charges and all the information is going to be reviewed.”

Thorp said, “This is obviously a triple homicide, and so we want to make sure that we cross all of our t’s and dot all of our i’s and insure that we have the maximum amount of information before we make formal decisions. It is complex.”

But neighbors say there have been numerous burglaries in the area in recent weeks and reported other suspicious activity.

“Within the past six months we’ve had two or three burglaries out here,” Leon Simmons, a neighbor, told KTUL-TV. Police say they haven’t connected Monday’s incident to any other break-ins.

“We’ve noticed a lot more people driving slow through the neighborhood, more than one at a time,” Simmons told KOTV.

Another neighbor, who didn’t want to be identified, told the Tulsa World she saw a suspicious black truck in the neighborhood, near where the burglary occurred on Monday, in the hours leading up to the incident.

Loading more stories
wpDiscuz
4
0
Would love your thoughts, please comment.x
()
x
| Reply
Elizabeth Marie Rodriguez, 21, is accused of setting up a burglary that led to the shooting deaths of three teens, including her boyfriend, in Broken Arrow, Oklahoma.