A report alleges that a convicted bank robber was Aaron Hernandez’s prison lover. The Daily Mail said in an April 24 report that Hernandez had been seeing Kyle Kennedy, 22, while behind bars. The article alleges that Hernandez, who committed suicide on April 19, gave Kennedy a $50,000 watch prior to his death. It adds that since Hernandez’s death, Kennedy has been put on suicide watch at Souza-Baranowski Corrections Center.

Prior to hanging himself with bedsheets, Hernandez wrote three letters, one to his fiancee, Shayanna Jenkins-Hernandez, one to his four-year-old daughter, and one to Kennedy. Those notes have not yet been released to their intended recipients.

1. Kennedy Is Doing Time for Robbing a Gas Station of $189 With a ‘Long Butcher-Style Knife’

In January 2015, Kennedy was arrested in Northbridge, Massachusetts, for the robbery of a Cumberland Farms gas station. The Milford Daily News reported at the time that Kennedy had stolen $189 in small bills while armed a with a “long butcher-style knife.”

Kennedy was arrested shortly afterwards following a short car chase. In a statement on Facebook, the Uxbridge Police Department said that Kennedy was driving “well in excess of 110 MPH.” During the chase Kennedy struck “several signs and then scrape the guard rail at the end of the off ramp” before coming to a stop and being arrested without further incident.

While he was held at Northbridge Police Station and was being brought to make a phone call, Kennedy again attempted to flee from officers. He got out the door but was recaptured shortly afterwards.

The Worcester Telegram listed Kennedy’s charges as “armed and masked robbery, assault with a dangerous weapon, driving with a suspended license, speeding, driving to endanger and escape from lock-up.”

The Daily Mail reports that Kennedy has done time in 2012 and 2013 for heroin trafficking and heroin possession. 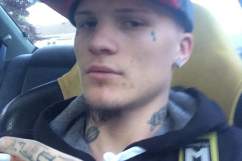 2. On His ‘Write-a-Prisoner’ Profile, Kennedy Describes Himself as Straight

According to his Write a Prisoner profile, Kennedy describes himself as “straight.” He writes, “Hello, my name is Kyle. I signed up on this website so I can correspond and possibly build friendships with people from around the world.” Kennedy adds, ” I work out, read books and write to help me pass the time while incarcerated. My hobbies on the street include racing motocross, building and customizing cars and motorcycles and doing anything that includes the outdoors. I am currently working to attain my Barbering license.”

Shortly before his January 2015 arrest, Kennedy posted on Facebook, “Pray 4 Me.” Less than an hour beforehand, he wrote, “Who got wheels and wanna make $.” Three days before his arrest, Kennedy posted a photo of a large wad of money while saying, “OK, had to put my n***** racks on top of minez.” A similar photo of money from a few days before that says, “Call me what you like but at least I ain’t broke.”

In October 2014, Kennedy seemed to want to change his life. He wrote on Facebook, “Today is the start of new life. Getting all my s*** prioritized for my long week ahead of me. I’m about to make a lot of changes in my life so please don’t take anything personal if I stop answering you. Thanks.” Under one September 2014 photo one of Kennedy’s friends asked, “You out?”

On that profile, he gives his location as Worcester, Massachusetts. The page shows Kennedy’s interest in cars, working on them and driving.

Kyle Kennedy is the son of businessman, Matthew Kennedy. The family lives in Uxbridge, Massachusetts, close to the state border with Rhode Island. When Matthew Kennedy was approached by the Daily Mail, he allegedly told reporters, “Get the f*** away and don’t f**king come back.” Matthew Kennedy is divorced from Kyle Kennedy’s mother, Cindy Curving Kennedy. He is now married to a woman named Deborah Kennedy.
The Worcester Telegram gave Kennedy’s address as 81 Eber Taft Road in Uxbridge, Massachusetts, after his 2015 arrest.

4. It Has Been Reported That Hernandez Killed Odin Lloyd Because Lloyd Knew of the Former NFL Star’s Bisexuality

A Newsweek report published just after Hernandez’s death, speculated that Odin Lloyd knowing of Hernandez’s bisexuality could have been a possible motive for the murder. Lloyd was murdered by Hernandez on June 17, 2013, in North Attleborough, Massachusetts.

The magazine says that a witness had been due to testify to this during Hernandez’s murder trial but withdrew shortly after receiving a large amount of money. That witness is described as a “longtime male lover” and a “high school friend.”

CBS Boston had earlier reported that Hernandez had left a $50,000 watch to a member of Kennedy’s family.

Hernandez’s funeral took place in his hometown of Bristol, Connecticut, on April 24. TMZ reports that “the police are out in force to make things don’t get violent.”

The Boston Globe reports that Hernandez will be cremated.

Hernandez’s brain has been donated to the Boston University where researchers will work to discover if the former tight end suffered from chronic traumatic encephalopathy.