Getty The sun is covered by the moon during a total solar eclipse in the Indian city of Varanasi on July 22, 2009.

So you’ve prepared to watch the solar eclipse on August 21, 2017 but unfortunately there are clouds in the sky. How much will this affect your solar eclipse viewing experience?

Unfortunately, depending on how many clouds are blocking the sun, you probably will not be able to view the highlight of the solar eclipse. The best part of the solar eclipse is what is known as the gossamer corona(pictured above), which is visible only if the sky is relatively clear and transparent.

The good news is that other solar eclipse phenomena can be experienced even if the clouds are covering the sun. For example, it will get very dark around you, much darker than it usually gets during the day. Animals also may exhibit strange behaviors. During previous eclipses, observers have seen “songbirds go quiet, large animals lie down, crickets start to chirp and chickens begin to roost,” according to the Los Angeles Times. 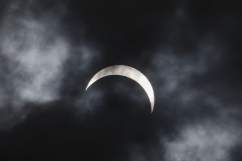 Is it Safe to Watch the Solar Eclipse Through a Camera?

Loading more stories
wpDiscuz
0
0
Would love your thoughts, please comment.x
()
x
| Reply
So you've prepared to watch the solar eclipse on August 21, 2017, but unfortunately there are clouds in the sky. Will this affect your solar eclipse experience?