Getty Gubernatorial candidate Ed Gillespie, R-VA, and his wife Cathy during a campaign rally at the Washington County Fairgrounds on October 14, 2017 in Abingdon, Virginia.

Cathy is the wife of Ed Gillespie, the 2017 Republican candidate for governor of Virginia. A political operative in her own right, Cathy has been a visible part of Gillespie’s campaign, traveling around the state to attend speaking engagements and meeting with local Republican parties.

Here’s what you need to know about Cathy Gillespie:

1. She Was Chief of Staff for Texas Congressman Joe Barton for 10 Years, and Worked on the 2004 Bush-Cheney Re-Election Campaign

GettyRep. Joe Barton (R-TX) questions BP Chief Executive Tony Hayward during a hearing of the Oversight and Investigations Subcommittee on “The Role Of BP In The Deepwater Horizon Explosion And Oil Spill” June 17, 2010 in Washington, DC.

As a political science student at Texas A&M University in 1984, Cathy became a staff member on Republican Joe Barton’s first campaign for U.S. Congress. After besting Democrat Dan Kubiak in the general election, Barton embarked on a career in Washington that would span more than three decades—and he brought Cathy with him.

Cathy served as Barton’s chief of staff from January 1988 until December 1997 (she met Ed during this time). Perhaps illustrating her continued close ties with the congressman, nearly 10 years after leaving the role she returned to serve as acting chief of staff while the current chief of staff took five months off for maternity leave.

According to her bio on the Crossover Basketball & Scholars Academy website, she also currently serves on the board of the Joe Barton Family Foundation, which “provides substantial financial support to select charitable organizations within Texas’ 6th Congressional District to enable them to achieve aggressive goals that would have been otherwise unattainable.”

Like her husband, Cathy also has close ties with President George W. Bush and worked for his administration in various capacities. In 2004, she was the director of W Stands for Women on the Bush-Cheney re-election campaign, and she also served on the Commission on White House Fellows.

GettyDeputy Chief of Staff Karl Rove (L) and White House counselor Ed Gillespie make their way to a farewell reception for the Director of the Office of Management and Budget Rob Portman August 1, 2007 in Washington, DC.

In a 2005 interview with Frontline, Ed Gillespie revealed that it was his wife, Cathy, who introduced him to legendary conservative political operative Karl Rove, and that the introduction ultimately landed him an informal role as an advisor to the 2000 Bush-Cheney presidential campaign.

“In 2000, I was working for [Ohio] Congressman John Kasich, who was the chairman of the House Budget Committee. He was considering running for president, but decided against it. … It was at that time that I started to talk to the folks in the Bush campaign in Austin. My wife [Cathy Gillespie] had known Karl Rove. She’s a political operative in her own right. … She and Karl had worked on a campaign in Texas back in 1984. She introduced me to Karl, and he asked me to serve as an informal adviser to the Bush-Cheney campaign from Washington, which I did,” said Ed.

In 1984, Rove was in Texas managing Joe Barton’s campaign for U.S. Congress. “[Cathy] was his first paid employee” on the campaign, Ed told Frontline.

At the time, Cathy was a student at Texas A&M University studying political science. “Karl would call her at 6:30 in the morning at her college apartment. Her roommates would get mad at him because it was not a campaign headquarters; it was a college apartment at 6:30 on a Saturday. But Karl was in constant motion,” added the gubernatorial candidate.

After Bush’s election in 2000, Ed co-founded a bipartisan lobby group in Washington D.C. and would continue to work closely with the president throughout his eight years in the White House, even leaving his own firm in 2007 to serve as an official advisor.

3. She Co-Owns a Number of Assets With Her Husband; Combined Worth Between 12 and 25 Million

.@CathyGillespie and I enjoyed spending time with an American legend tonight! Thanks for your support, Buzz Aldrin. pic.twitter.com/W8XDOTElsi

During Ed Gillespie’s unsuccessful 2014 campaign for U.S. Senate, he was required to make a mandatory financial disclosure to the Federal Election Commission. The disclosure listed a number of assets held by him and Cathy, which were valued together at between $12 million and $25 million—candidates do not disclose the exact value of assets to the FEC, but give a range of value for each.

The disclosure also revealed that the Gillespise owns a small stake in a real estate business, a production company and several investment groups. The majority of the holdings were listed in various mutual funds valued between $1,000 and $250,000.

4. Cathy Is the Co-Chairman of Constituting America

Since January 2010, Cathy has served as the co-chairman of Constituting America, whose mission is “to reach, educate and inform America’s youth and her citizens about the importance of the U.S. Constitution and the foundation it sets forth regarding our freedoms and rights.”

According the website, the project, which is based in Colleyville, Texas, sponsors several programs aimed at educating adults and children about the Constitution,

including our keystone program — the national We The Future Contest for kids. We also have an exciting new program that features Constituting America Founder and Co-Chair Janine Turner and daughter, National Youth Director Juliette Turner, speaking in person and via Skype and Google Hangout to classrooms around the country. Our 90 in 90 Study Program: History Holds the Key to the Future is a scholastic study with essays on the founding documents of our country, written by constitutional scholars from the best universities and law schools in the country.

Additionally, the organization also publishes a number of white papers and “90 day studies” on topics like “The Relevancy of the Federalist Papers,” “Constitutional Authority Statements,” and “The Intrigue of Presidential Elections.”

The website also offers the option to “Book a Speech,” where teachers can request “non partisan, educational internet sessions … tailored to your teaching schedule and classroom needs.” Cathy is not one of the offered speakers.

5. Cathy & Ed Met in Texas on a Congressional Staff Softball Team; They Have Three Kids, John, Carrie and Mollie

“When I first met Ed on a congressional staff softball team thirty years ago, I was immediately impressed by his team spirit. Not only was he a natural leader and really good player, but he always cheered on his teammates, and encouraged the weaker players on his team (like me!) not to give up.

Needless to say, I developed an immediate crush,” Cathy wrote in a 2016 fundraising email for Ed’s gubernatorial campaign. At the time, Cathy was chief of staff for Congressman Joe Barton, and Ed was working for Congressman Dick Armey.

The couple has lived near Mount Vernon since 1996, and are members of the Good Shepherd Catholic Church. They have three children, John, Carrie and Mollie.

Cathy told The Connection, a regional Virginia newspaper, in 2004, “Even though Ed was serving as RNC Chairman, he still managed to coach our son’s CYO basketball team from November to March this past season, and take time to do special things with our daughters. He took Carrie to ‘Take Your Daughter to Work Day‚’ and takes Mollie out with her friends. Being a good father is his top priority. And that is why he is working so hard for the President˜for our children.”

The paper also asked Ed what he would do if his three children grew up to be Democrats, to which he replied,”I come from an area that was very Democrat; my mother is a Democrat and my father an independent. So far, I haven’t seen any indication [that my children will become Democrats], but as long as they’re politically active, it’s okay.” 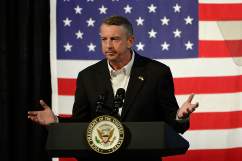 Ed Gillespie Net Worth: 5 Fast Facts You Need to Know

Read More
Politics, Virginia
Cathy is the wife of Ed Gillespie, the 2017 Republican candidate for governor of Virginia. Here's what you need to know.