The two White Lives Matter rallies planned in Tennessee on Saturday (one of which was officially “cancelled” after only slightly more than a dozen people showed up in support of it) were organized by members of various white supremacist groups and their leaders, one of whom was Brad Griffin, also known as “Hunter Wallace,” the “Public Relations Chief” for the League of the South (per his Twitter bio). Here’s five things to know about Wallace/Griffin and the League of the South:

1. He Cancelled the Murfreesboro Rally Minutes After Its Scheduled Start

The Murfreesboro rally originally scheduled to run from 1 to 4 p.m. local time on Saturday. At 1:03 (according to Twitter timestamps), Griffin (under his Hunter Wallace pseudonym) took to Twitter to announce “Murfreesboro cancelled.” A minute later he tweeted an explanation: “Had some intel Murfreesboro was a lawsuit trap. Not worth the risk.”

2. The League of the South Still Advocates Southern Secession

Michael Hill, head of white supremacist League of the South, at #Shelbyville. Used to be a history professor at historically black college. pic.twitter.com/6whhuEmIyG

The League of the South was founded in 1994, initially under the name “Southern League.”

The group denies being “racist”; the FAQs page on its website includes the following question-and-answer combination:

Q. Is The League a “racist” organization?
A. “Racist” is a slur used by anti-Whites. We are pro-South and pro-White.

However, that same FAQs page says the League has “a firm belief in a kith & kin nation,” defined as “A particular people with a distinct culture living on their own established territory.” As for the “particular people” welcomed into the League, those would be “Anglo-Celtic” people “whose ancestors came from the British Isles.”

The League’s “Kith and Kin” page goes into more detail: “we support a return to a society and civilization based on allegiance to kith and kin rather than to an impersonal state wedded to multiculturalism, diversity, the rights of man, and other similar abstractions. … At its core, the South is British-Western European and Christian. Should this change, then the South, as we know it shall be no more.”

Despite all this, the front page of the League’s website says “The League of the South is not a ‘neo-Confederate’ or ‘Southern heritage’ organization, although we certainly do honor our ancestors and our largely Christian historic inheritance as Southerners.”

3. Griffin Initially Criticized the League of the South for Being Insufficiently Racist

Despite Griffin’s current status as League of the South’s public relations chief (under the Hunter Wallace name), the Southern Poverty Law Center reports that originally, Griffin criticized the League because it wasn’t racist enough for him. In 2010, Griffin wrote “What finally soured me on the League of the South was their unwillingness to defend White Southerners as a racial and ethnic group. They only wanted to talk about Southern culture. I remember reading a League position paper somewhere which proposed a multiracial Confederacy (White, Black, Hispanic) based on social equality. If that is the ultimate goal of Southern independence, why bother to restore the Confederacy?”

Griffin was born in 1980 and grew up in Eufaula, Alabama. In a December 2016 essay titled “My Alt-Right Biography,” which he published on his website Occidental Dissent, he said that growing up in Alabama’s Black Belt made him believe that “race existed and that racial differences were real,” though he did not officially embrace white nationalist beliefs until his sophomore year of college, when he read a book by Pat Buchanan.

Griffin’s “alt-right biography” makes no mention at all of the League of the South, let alone Griffin’s earlier disapproval of it. He joined that group in 2012, according to the SPLC.

4. Under Previous Pseudonyms, he Founded The Phora, an Early Nationalist Discussion Forum

ThePhora.net currently describes itself as a “general discussion forum” with a “race relations emphasis.” As Griffin explains in his alt-right biography, after being banned from various gaming message boards, he set up a VBulletin forum initially called “Freedom Forums” and going through a variety of name changes before settling on “The Phora” (which he later describe as being ” like the 4chan of the early 2000s”).

The SPLC adds that from 2001 to 2005, during the earliest days of the future Phora, Griffin posted under a variety of pseudonyms including Prozium, Fade the Butcher, nJEcTiOn and Daedalus, before settling on Hunter Wallace.

However, ThePhora itself banned “Fade the Butcher” in 2007, for behavior considered bizarre even by white nationalist standards. On the thread discussing “Fade’s” forum ban, Phora poster “Il Ragno” said (italics lifted from the original): “Does anybody recall the time here that he posted a bizarre fake “conversation” with David Duke? In which he took a block of text out of some book or article Duke had written, chopped it up into bite-size chunks, and “responded” to each excerpt as though Dave had dropped by Chez Fade to sip juleps and be interviewed? (Nor was this a case of Fade doing one of his usual “deconstructions” and me misconstruing the intent. He actually peppered his responses with “Dr Duke, as I mentioned previously” and similar personalized touches designed to appear as though this were an actual dialogue taking place.)”

5. He Met the Lafayette Theater Gunman During an Involuntary Hospital Commitment

In April 2008 Griffin experienced what he later called “the single most embarrassing thing that has ever happened to me”: while reading news of the then-current financial crisis, Griffin says he got “hyped up on caffeine,” which meant his “health appeared to take a turn for the worse,” and his parents found this all disturbing enough to take him to the West Central Georgia Regional Hospital in Columbus, where he eventually woke up in a “drug induced haze….thrown for a loop under the influence of psychotropic drugs which are used to treat mania.”

Griffin told this story in 2015 on Occidental Dissent, to explain how he happened to meet John “Rusty” Houser, the gunman who had recently killed two people and wounded nine more at a movie theater in Lafayette, Louisiana. (According to Griffin, when he saw Houser in the hospital, he initially confused him for SPLC founder Morris Dees.) 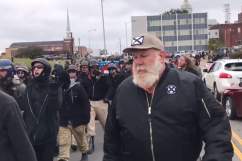 Read More
5 Fast Facts, Breaking News
Brad Griffin is the real name of Hunter Wallace, the White Lives Matter organizer who handles public relations for the League of the South.