On Sunday night, hundreds of people gathered at the Route 91 Country Music Festival in Las Vegas to watch acts like Lauren Alaina, Jason Aldean, Big & Rich, and Luke Combs take the stage. Just after 10 p.m. local time, shots were fired from the nearby Mandalay Bay Resort & Casino. Bullets littered the festival grounds as bodies dispersed. A total of 58 people (not including the gunman) lost their lives and an additional 500+ were injured.

The suspect in the shooting has been identified by police as Stephen Paddock, 64.

He committed suicide before police were able to get to his room. Law enforcement officials were alerted to his hotel room on the 32nd floor of the hotel due to a smoke alarm that was set off by the gun smoke. Upon entering the room, police found Paddock dead.

As the pieces of this heinous crime have been put together, some people have been digging deep into various conspiracy theories in an effort to explain the one question that no one can answer: Why?

Over the past 24+ hours, rampant speculation and hypothetical arguments have circulated online. While not everyone is buying into these conspiracy theories, they are certainly getting some attention on the internet today.

1. Law Enforcement Officials Have Not Figured Out a Motive

Perhaps the very reason that these conspiracy theories are taking social media by storm is that Paddock’s motive is unknown. This has led to people becoming their very own detectives, trying to figure out exactly what went through Paddock’s mind, how long he’d been planning this (presuming it was pre-planned based on the fact that he had more than 10 rifles in his hotel room), and just about every other question you can think of.

“I just want closure. Why? What’s the reason that on that particular night, one individual would sacrifice everyone else for his insanity?’’ asked Herman Gold, who escaped the gunfire unharmed.

Stephen Paddock Had ‘More Than 10 Rifles’ in Hotel Room

2. The Shooting Happened Near the Luxor Hotel, Which Is Shaped Like a Pyramid — a Sign of the Illuminati

Gotta get down on Friday! What are your plans this weekend?

The festival grounds are located across from the Luxor Hotel on the south end of the Las Vegas strip. The Luxor is known for its unique architecture as it is shaped like a pyramid and is easily distinguished. A pyramid is a known symbol of the Illuminati.

“The symbol of a pyramid has long been associated with the Illuminati, a fictitious shadowy group whose powerful members secretly control the [world],” reports Mashable.

“The Luxor is known as the Egyptian themed casino with the pyramid that has the illuminated apex and obelisk nearby. These symbols are of great usage to the ‘Illuminati’ who subscribe to many of the [magical] and esoteric concepts of ancient Egypt and its mystery schools that shared these ideas only to the initiates deemed worthy,” the Illuminati Watcher explained.

Some conspiracy theorists believe that the shooting happened at this location because it was a sign of the Illuminati. Others believe that it was some kind of public sacrifice or offering. 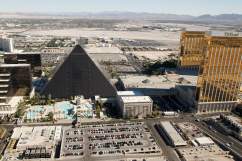 3. Freemasons Have Been Associated with the Illuminati & the 32nd Floor Hotel Room Is Linked, Say Theorists

First, what exactly is Freemasonry? For the sake of ease, it’s basically a fraternity. The following definition can be found on The Grand Lodge of Ohio’s website.

“Freemasonry is the oldest, largest and most widely recognized fraternal organization in the world. Founded in London, England in 1717, its current worldwide membership totals 3.6 million members, 1.6 million of which are in North America. With 120,000 Masons and 530 local Lodges, Ohio has one of the largest Masonic memberships of any state in the country. As a fraternal organization, Freemasonry unites men of good character who, though of different religious, ethnic, or social backgrounds, share a belief in the fatherhood of God and the brotherhood of mankind.”

A few years ago, country music star Brad Paisley opened up about being a Mason. You can watch him talk about his beliefs in the video below.

So, what do Freemasons have to do with the Las Vegas concert shooting? Paddock took aim at thousands of people from his hotel room on the 32nd floor. The number “32” is significant when it comes to being a Mason. The organization uses degrees to show rank.

The 32nd degree is known as the Master of the Royal Secret. The highest degree Mason is a 33.

4. One Witness Told Local News that a Strange Woman Told Concertgoers ‘You’re All Going to Die’ Before the Shooting

One of the strangest accounts from that terrifying night came by way of a witness who recalled being told that she was going to die, about 45 minutes before Paddock started shooting at the crowd. The concertgoer named Brianna was celebrating her 21st birthday at the show. She recalled a weird occurrence that may have been some kind of serious warning.

“She started messing with another lady and told us that we were all going to die tonight. We went back up to the room, and as soon as we reached the room from the concert venue, we just heard constant shootings. At first we thought it was fireworks, but then it was — it was shooting,” Brianna told News3LV.

As you can probably imagine, people have been very curious about Brianna’s interview — and about this mystery woman who may have been warning people about the shooting. But how did she know?

You can watch Brianna’s interview in the video below.

Last but not least, people have been talking about an apparent tattoo that was spotted on Paddock’s neck. The number “13” appears to be on his neck in the first photo that was released of him. You can make out the numbers in the photo above, as they appear right until his beard in the center of his neck.

Some people don’t believe that this is a tattoo — it could just be the way the skin on his neck was hanging. However, other people are convinced that this is some kind of sign.

There are several different things associated with the number 13. The number is “symbolic of rebellion and lawlessness,” according to the Bible Study Site. Additionally, you can find all kinds of symbolism with the number when it comes to Christian faith.

At the same time, many people believe that “13” is an unlucky number (think Friday the 13th).

The internet has been trying to figure out what that mysterious “13” is on Paddock’s neck, but there hasn’t been any confirmation about it being an actual tattoo. For now, the “13” has become part of this bigger conspiracy theory. 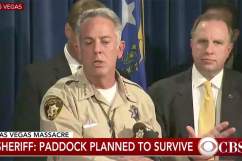 Loading more stories
wpDiscuz
0
0
Would love your thoughts, please comment.x
()
x
| Reply
Conspiracy theories are running rampant after a shooting at the Route 91 Country Music Festival in Las Vegas left 59 dead and hundreds more injured. Here is what you need to know.