On January 6, 2002, fashion writer and single mother Christa Worthington was found stabbed to death in her home in Truro, Massachusetts. Her 2-year-old daughter, Ava, was found by her side, unharmed.

The case attracted national attention. Not only was the murder itself a gruesome mystery, but police say it’s possible that Ava spent up to 36 hours beside her dead mother.

Since his arrest, McCowen has maintained his innocence. To date, he has had one appeal and three motions for a new trial denied.

Read on to learn more about Christopher McCowen.

1. DNA Evidence Placed McCowen at the Scene of the Crime

Nearly four years after Christa’s death, investigators found a match between McCowen’s DNA and that in Worthington’s body. Recalling the breakthrough, reporter Eric Williams tells CBS, “It was just a bombshell. A huge bombshell… We were just like electrified. Couldn’t believe they’d come up with a match.”

The outlet reports that many people in the Cape Cod community had no idea who McCowen was when authorities revealed his identity. McCowen had reportedly been interviewed by police already at that point in time– he’d even given his DNA over voluntarily a year prior. In both interviews with police, McCowen denied knowing Christa.

Speaking to CBS, District Attorney Michael O’Keefe says, “And then he’s presented with a fairly strong piece of evidence that he’s lying.”

After that, McCowen’s story changed. “He admits that, yes, he went there on Friday night, yes, he had sex with her and yes, he beat her. But he doesn’t want to bring himself to admit that he killed her. So he blames the worst part of it on someone else.”

2. He Is Speaking out on TV for the First Time Since His Conviction

On Friday, McCowen, who didn’t testify at his 2006 trial, spoke to ABC’s 20/20 about his arrest and his relationship with Christa Worthington.

Speaking to ABC’s cameras, McCowen’s attorney said, “At this point Chris wants to get his story out there… Chris wants to explain, Chris regrets not testifying.”

In 2010, the Supreme Court denied McCowen’s first appeal. According to Cape Cod Today, he had “solid grounds” for an overturned conviction– national and local polls even showed 90% participants believing his innocence.

In 2014, Superior Court Judge Gary Nickerson denied McCowen’s third motion for a new trial. In the appeal, McCowen’s attorneys alleged that the chief medical examiner in the case had “forged the paperwork that certified him a pathologist”, leading them to question his credibility as a witness.

3. He Has Admitted To Having Sex with Worthington

Christa’s home was along McCowen’s trash route, which is how the two came to meet. Speaking to 20/20, McCowen said that Christa’s trash pick-up day was Thursdays.

On the Thursday before Christa’s death (she was found dead on a Sunday), McCowen says Christa asked him into her house to help her remove a Christmas tree. “She asked me to come in the house and to look at her Christmas tree. One thing led to another.”

He says that the two had “mutual” sex, and only on that one occasion.

In trial, McCowen’s story changed a number of times. Speaking to 20/20, he said that he didn’t remember talking with police after his arrest because he was under the influence of Percocet, cocaine, and marijuana. ABC reports him as saying, “They [police] kept on switching everything up… I was so intoxicated off of all of them drugs that I really didn’t know what the hell was going on.”

After admitting that he slept with Christa, McCowen changed his story once again to say that he and his friend, Jeremy Frazier, went to Christa’s home a night after heavy drinking and beat her. At one point he claimed that Frazier had killed her.

When 20/20 asked why he said he and his friend went to Christa’s house, McCowen says he doesn’t recall going to Christa’s home. “That’s what they [police] said that I did. I didn’t do that.”

In court, McCowen’s attorney, Bob George, argued that his client was an “easy target” and that he asn’t “smart enough to defend himself.” CBS reports George as saying, “This is a person with a 76 to a 78 IQ on his best day, meaning on a day where he’s not using drugs and alcohol, not under pressure.”

Speaking to Court TV, O’Keefe said after the trial, “We were convinced, we remain convinced, and the jury certainly was convinced, I believe by their verdict, that Mr. McCowen acted alone in this terrible crime.”

5. Christa’s Murder Is the Subject of a New Podcast

A KILLING ON THE CAPE: Is the right man in jail for murdering Christa Worthington? Listen for free on @ApplePodcasts https://t.co/rNNXRu2okO pic.twitter.com/mJXEucAKzs

The murder of Christa Worthington is the subject of a new six-part podcast, “A Killing on the Cape.”

One of the first voices to speak in the podcast is Gary Pelletier, McCowen’s attorney, who says, “I believe that they convicted the wrong person here, that the real killer is out there.”

Listeners also have the chance to listen to the 911 recording of Tim Arnold, Christa’s friend, who called police with the news that he’d found Christa’s body. 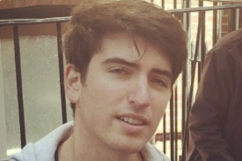 Loading more stories
wpDiscuz
0
0
Would love your thoughts, please comment.x
()
x
| Reply
Chris McCowen is the man convicted of raping and murdering Christa Worthington. He has long maintained his innocence.