A married charter school teacher in Miami has been accused of conducting a two year love affair with a student. Valeria Ashley Costadoni, 30, was arrested on January 8 and charged with lewd and lascivious battery on a child 12-16 years old, according to the Miami-Date Corrections service. Her bond was set at $15,000. NBC Miami reports that at her court appearance in Miami on January 8, Costadoni was appointed a public defender. A report from CBS Miami says that Costadoni refused to speak to arresting officers until a lawyer was present. Costadoni is a language arts teacher at the Miami Arts Charter School Wynwood campus.

1. Costadoni Is Accused of Having Oral Sex With the Minor in Her Empty Classroom

CBS Miami reports that the victim told police that he and Costadoni performed oral sex on each other inside of her classroom after everybody had left. The student, who is now 17, said that the relationship went on for two years with the abuse also occurring in her car, at her home and in his home. NBC Miami says that the teen had sex with Costadoni four times at her home. The oral sex in the classroom occurred on “many different occasions,” according to ABC Miami’s report. Police have not said what led them to investigate Costadoni.

2. Costadoni Has Been Teaching at the Charter School for 7 Years

On Costadoni’s now-deleted profile on the Miami Arts Charter school website it says that she has been teaching at the school for seven years. The same bio says that Costadoni is a teacher of English and AP literature. She taught both high school and middle school. Costadoni was the language department’s chair.

Costadoni was born in Asuncion, Paraguay. She moved to the Miami area in the early ’90s. She graduated with honors from Miami Coral Park Senior High School. From there, Costadoni got a degree in poetry with a minor in Latin American studies from Johns Hopkins University in Baltimore, according to her school bio. Prior to taking up teaching, Costadoni worked in the foreign language department of Johns Hopkins.

A March 2013 post on Costadoni’s Facebook page shows her getting married. Other posts on her page show her love of the television series Star Trek. 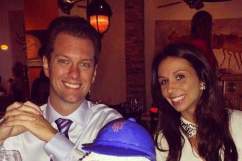 3. Costadoni Was Often Celebrated by Her Students on Twitter

Over the years, Costadoni’s students often took to Twitter to talk about her teaching skills and personality:

ms.costadoni is my # 1 favorite teacher of all time.

Someone better return Ms.Costadoni's pen or i'll set them on fire…

Costadoni’s one review on Rate My Teachers is negative. It reads, “She has favorites and it’s obvious. She used to be an average teacher and now it’s like she doesn’t care about students unless they’re one of her favs. Students can’t stand her.” The review was left in September 2016.

4. It’s Texas That Is Leading the Way in Legislation Regarding Teacher/Minor Sexual Assaults

In November 2016, Texas State Representative Tony Dale sought to pass legislation that would prevent, as Dale says, teachers merely resigning and moving. Dale said of his legislation, “HB 218 increases penalties and close loopholes that allow educators who engage in inappropriate relationships to resign and obtain employment in another district. This bill seeks to allow Texas the tools we need to get rid of teachers who prey on our children.” Dale represents Cedar Park, where Nicole Faires-Andrews, a teacher who was accused of having a sexual relationship with a student lives.

Loading more stories
wpDiscuz
0
0
Would love your thoughts, please comment.x
()
x
| Reply
A charter school teacher in Miami has been accused of conducting a two year love affair with a student.