Robyn Krauthammer was the longtime wife of political pundit Charles Krauthammer. On June 21, Charles Krauthammer died at the age of 68 after a courageous battle against cancer. Less than a year before his death, Krauthammer had an abdominal tumor removed. Although the surgery was thought to have been a success, in June 2018, Krauthammer announced that doctors had given him weeks to live.

Robyn and Charles Krauthammer were married in 1974. The couple has one son, Daniel, together. Despite being a trained lawyer, Robyn Krauthammer quit the legal profession in the 1970’s to focus on her artistry.

1. Robyn & Charles Krauthammer Were Founders of a Foundation to Preserve Classical Jewish Music

Together, Robyn and Charles Krauthammer founded a charitable foundation, Pro Music Hebraica. The stated goal of the foundation is to preserve classical Jewish music, some of which was thought to have been lost forever. On her profile on the Pro Music Hebraica website, it says the couple was inspired to start their foundation to help bring Jewish classical music “beyond the synagogue.” She felt that there was a wealth of Jewish music that was “untapped and unperformed that needed exposure and appreciation.” Edward Rothstein writing Mosaic Magazine described Pro Music Hebraica as the “marvelous brainchild of Charles and Robyn Krauthammer.”

Since its inception, the Pro Music Hebraica has worked with the Kennedy Center and Julliard. The award-winning classical pianist Evgeny Kissin said in an interview Carnegie Hall’s website said that he had also worked with the organization. Robyn Krauthammer said in a 2009 interview that her work with the foundation takes up “many hours” and that she often works “late into the night.” Speaking specifically about a number of concerts during the same interview, Robyn said, “Much of the music performed in these concerts has either never been performed before or not for a hundred years.”

In a 2005 interview with C-Span, Krauthammer described the organization as “a fledgling enterprise in which the idea that [Robyn] had, which was that there are some sort of lost traditions of classical Jewish music, not religious, not folk, not klezmer, not the kind of stuff people know, but classical works written by Jews.”

2. Charles Krauthammer Said He Owed His Career to Robyn

According to Charles Krauthammer’s Twitter page, where he was followed by close to one million people, he followed one account, the charitable foundation run by Robyn. In a tribute to his wife and son in his book, Things That Matter, Charles Krauthammer wrote, “This book is dedicated to my son, Daniel, whose incisive, brilliant mind has kept me intellectually honest and at my keenest since he was about ten years old. And, to my wife, Robyn, who urged me 35 years ago to follow my calling without looking back. With extraordinary intelligence, humor, grace and loving-kindness, she has co-authored my life, of which this book is but a reflection.”

A profile of Charles Krauthammer says that he “proudly” displays his wife’s artwork in his office. When Krauthammer received the 2009 Eric Breindel Award for Excellence in Opinion Journalism, he said in his acceptance speech, via Vanity Fair, “My award, my achievements, my entire career as a journalist are owed to one person. I share this prize with the one who not just encouraged and launched me in this endeavor, but who has sustained me all these many years—my dear wife, Robyn. Thank you.”

3. The Couple Met in a Laundry Room at Oxford University

The couple met while both were studying at Oxford University in the 1970’s. At the time Robyn, a native of Australia, was studying at St. Anne’s college. Krauthammer said that the couple’s first encounter happened while they were both doing laundry. He said, “I’d never seen a washing machine in my life and struck up a conversation with her. We were married two years later.” During a 2005 interview with C-Span, Krauthammer said that at the time he was living in the only coed dormitory at Oxford.

After attaining her law degree, Robyn went to work for a law firm in Paris. Eventually, Robyn Krauthammer decamped to the U.S. after abandoning her legal career to study at the Corcoran School of Art in Washington D.C. and the Maryland Institute College of Art, according to her Pro Music Hebraica profile.

In a 2003 interview with Time Magazine, Krauthammer cited his wife’s Australian nationality as being part of their love of dogs. The couple’s first dog was a border collie named Hugo.

4. Robyn Says She & Her Husband ‘Made it a Point in Life to Do Things We Really Love’

Robyn Krauthammer told the Maryland Gazette in a 2009 interview, “We have made it a point in life to do things we really love … Work done in that spirit is not burdensome. It’s actually enjoyable.” During the same interview, the couple is described as living in Chevy Chase, Maryland. She added that although her husband was born into an observant Jewish family, she converted to the faith. Robyn opines that in relation to her Jewish musical efforts, “This outside-inside view of Jewish culture probably actually gave [me] an enhanced view of the beauty of the music and how it should have a greater place in the general music canon.”

An online profile for Charles Krauthammer described him losing interest in psychiatry. At his wife’s behest, he wrote a letter applying for the job of managing editor of the New Republic.

5. Prayers Are Being Offered to Robyn Krauthammer From Figures Across the American Political Spectrum

Thoughts and prayers are being offered up to Robyn Krauthammer, and the rest of Charles Krauthammer’s family, by Twitter users from across the American political spectrum. In a statement, Kentucky Senator Mitch McConnell said in closing that he and his wife are “praying for Robyn, Daniel, and everyone who knew and loved this remarkable man.”

Here are some of the most poignant messages of support:

.@krauthammer Such intellect, wit and gentle disposition will never be seen again. He is already missed; Blessings to Robyn and Daniel.

All the love and comfort I can muster for Robyn and Daniel today.

Charles will be missed. Horribly.

Charles @krauthammer was one of the finest men on television, to here his analysis on day to day politics and his accuracy of intelligence in his writing is something that we all miss. Prayers to Charles, his wife Robyn and the rest of their family. https://t.co/FdOoKfLopS

R.I.P. good friend. I am sure you will be owning the panel discussion in heaven as well. And we’ll make sure your wise words and thoughts – your legacy – will live on here @krauthammer

I just lost it – @SpecialReport ended today's program with a shot of the empty chair where Charles @krauthammer used to sit on @BretBaier 's panel. ? Rest in peace, Charles. Your intellect and wit will be sorely missed. We loved you. Prayers of comfort to your son and wife.?

Saddened to hear about the passing of Charles Krauthammer. He was one of conservatisms greatest voices and will be deeply missed by all. My prayers are with his wife and son this evening.

How much did I value and respect Charles Krauthammer’s (frequently witty and always insightful) analysis? My first child was born as CK delivered his take on the @SpecialReport panel. I muted the TV in the delivery room for my wife’s sake – but luckily there was closed captioning https://t.co/N4LLTIi50X 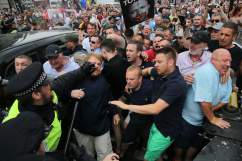