Getty Omarosa Manigault's net worth is estimated to be $3.5 million dollars, though that might change after her book is released.

Omarosa Manigault’s net worth is currently estimated to hover around $3.5 million dollars, according to Celebrity Net Worth. However, her recent explosive book deal could cause that number to skyrocket in the near future.

Manigault recently announced the August release of her memoir, ‘Unhinged,’ which details her time in the White House in 2017 before she was let go.

Here’s what you need to know about Manigault’s net worth.

Deputy Press Sec. Raj Shah responds to Omarosa's comments on Pres. Trump's tweets: "Omarosa was fired three times on The Apprentice, and this is the fourth time we've let her go." https://t.co/2bQW3b8Bun pic.twitter.com/b7mLiGFJFQ

Town and Country reports that Manigault was one of the higher paid staffers in 2017 for the Trump administration, earning just shy of $180,000 for her annual salary.

Manigault actually earned the same amount as Kellyanne Conway. Though Manigault insisted that she chose to resign from her position, Deputy Press Secretary Raj Shah clarified that Manigault was let go. During a press conference, Shah said, “Omarosa was fired three times on The Apprentice, and this is the fourth time we’ve let her go.”

Manigault was one of 22 staffers for the Trump administration receiving the highest salary, according to a White House report.

2. Omarosa Was Not Officially Paid at All For Her Various Reality TV Stints

Though Manigault has appeared on ‘The Apprentice,’ VH1’s ‘The Surreal Life,’ NBC’s ‘Fear Factor,’ and Oxygen Channel’s ‘Girls Behaving Badly,’ she was not technically paid for any of those appearances.

3. Omarosa Was Left With One Third of the Estate of Her Late Fiancé Michael Clarke Duncan

Omarosa on Michael Clarke Duncan's Passing | Where Are They Now | Oprah Winfrey NetworkOmarosa met Oscar®-nominated actor Michael Clarke Duncan in a Los Angeles Whole Foods. After giving him her phone number, the two began what Omarosa calls "a true love story". They dated for three years before getting engaged, and planned to marry in January 2013. Those plans changed in the blink of an eye when Michael passed away unexpectedly in September 2012. Watch as Omarosa recalls the night she discovered that Michael had stopped breathing. Plus, she reveals the happiest moment she's experienced since Michael's passing, how she's coping with her grief, and the greatest lesson she's learned from her time with him. For more on #WhereAreTheyNow, visit http://bit.ly/2dTkIT9 Find OWN on TV at http://www.oprah.com/FindOWN #OWNTV #WhereAreTheyNow #Oprahwinfrey SUBSCRIBE: http://bit.ly/1vqD1PN Download the Watch OWN App: http://bit.ly/2hr1nX2 About Where Are They Now: Their stories made headlines across America. Now, the original series Oprah: Where Are They Now? tracks down the Oprah Show guests who made you laugh…and made you cry. Find out where they are now, plus see what happened to the biggest newsmakers of all time and how their lives changed after sudden fame and notoriety turned their worlds upside down. About OWN: Oprah Winfrey Network is the first and only network named for, and inspired by, a single iconic leader. Oprah Winfrey's heart and creative instincts inform the brand — and the magnetism of the channel. Winfrey provides leadership in programming and attracts superstar talent to join her in primetime, building a global community of like-minded viewers and leading that community to connect on social media and beyond. OWN is a singular destination on cable. Depth with edge. Heart. Star power. Connection. And endless possibilities. Discover OWN TV: Find OWN on you TV!: http://bit.ly/1wJ0ugI Our Fantastic Lineup: http://bit.ly/1qMi2jE Connect with OWN Online: Visit the OWN WEBSITE: http://bit.ly/1qMi2jE Like OWN on FACEBOOK: http://on.fb.me/1AXYujp Follow OWN on TWITTER: http://bit.ly/1sJin8Y Follow OWN on INSTAGRAM: http://bit.ly/LnqzMz Follow OWN on PINTEREST: http://bit.ly/2dvfPeN Omarosa on Michael Clarke Duncan's Passing | Where Are They Now | Oprah Winfrey Network http://www.youtube.com/user/OWN2013-04-03T02:30:08.000Z

According to Coed, Manigault was given a third of her late fiancé’s estate, which held anywhere from $1 to $5 million dollars.

Duncan died in 2012 at 54 years old of a heart attack. Manigault was the one who announced his death, after performing CPR on him personally when she found him. Some estimates of Duncan’s worth put it as high as $18 million, but Manigault likely split the estate between multiple people, including Duncan’s mother and sister.

4. Omarosa Landed a ‘Seven Figure’ Book Deal to ‘Spill the Beans on Trump’

According to The Washington Examiner, Manigault signed an undisclosed amount surpassing seven figures for her book deal, which is supposed to be released mid-August.

The book, titled ‘Unhinged,’ is set to detail Manigault’s time in the White House. Manigault reportedly leveraged secret audio tapes that she’d recorded of her conversation with the president as leverage for her book deal, according to CNN.

It’s unclear whether Manigault’s current estimated net worth of $3.5 million includes her recent book deal. If not, the book deal could set her net worth far closer to $5 million, or even higher.

In 2017, Manigault married John Allen Newman, a senior paster at The Sanctuary of Mount Calvary. They met while Manigault was teaching at Howard University, and were engaged a year after.

Though Newman’s specific salary is unknown, Wiki Net Worth reports that the average salary for a senior pastor is around $50,000. 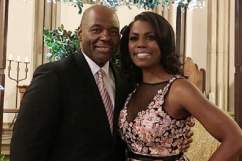 John Allen Newman, Omarosa Manigault’s Husband: Who Is She Married To?

Read More
5 Fast Facts
Omarosa Manigault's net worth is estimated to be $3.5 million dollars, though that might change after her book is released.