As The Blacklist returns for its sixth season on NBC, so to do the speculations about Raymond Reddington (James Spader). The show’s mysterious puppet master was given a massive spin last season when it was revealed that the character we’ve come to know is actually an imposter, and that the real Reddington died decades ago.

So who was the real Reddington?

What a treat! You may now watch the first five minutes of the new season of #TheBlacklist. Link in bio.

According to The Blacklist Wikia, Raymond Reddington was an American citizen and the father of Elizabeth ‘Liz’ Keen. He attended the United States Naval Academy and graduated top of his class at the age of 24. He was reportedly being groomed for the position of Admiral when he disappeared while coming home to visit his family in December 1990. In 1994, he mysteriously resurfaced, selling classified documents to the enemy and was charged with treason.

In the season five finale, “Sutton Ross”, its revealed that Reddington died around the time of his disappearance. It is his bones that are found in the duffel bag that the episode revolves around. The Wikia goes as to far as to speculate that he may have been killed by his daughter Liz, who would have been around 4 years old at the time. The man we now know as Reddington was who resurfaced in 1994 with the classified documents and the plans to build a criminal empire.

Handcuffs haven't stopped Red before… What about this time around? #TheBlacklist

Despite the fact that the current Reddington is an imposter, it appears that he was also involved in the fate of Liz’s mother Katarina Rostova. Dembe comments that he doesn’t think Elizabeth will “ever be ready to learn about what you did to Katarina,” implying that Reddington is determined to make sure Liz never learns the truth of what happened to her mother.

Series creator Jon Bokenkamp has spoken at length about the shocking twist, and the fact that the character’s identity is more complex than it may initially seem. He even went as far as to say that fake Reddington has become more authentic than the real Reddington ever was, and that the fake one merely used the identity of a normal man to start a criminal empire.

You can't keep a bad man down… Until now. #TheBlacklist

“That’s something that I hope the audience understands,” Bokenkamp told EconoTimes. “This impostor, this person who has taken the identity of Reddington, has probably lived as Reddington longer than Reddington ever did and was far more interesting, and far more dangerous, and far funnier, and is the guy we want to watch.” 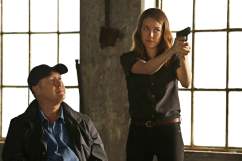 How to Watch ‘The Blacklist’ Season 6 Premiere Without Cable