Dalia al-Aqidi is an Iraqi-American journalist running as a Republican against Minnesota Democrat Rep. Ilham Omar, who is up for re-election in November. The primary for the House seat will take place on Aug. 11, 2020.

1. Dalia al-Aqidi Has Worked As a Journalist Since 1975 in the Middle East and Washington, D.C.

According to her LinkedIn page, Dalia al-Aqidi, 51, was a co-host for Abu Dhabi TV in the United Arab Emirates starting in 1975. She then became a “broadcaster/co-writer/actress” for Baghdad Radio & TV in Baghdad, Iraq.

In 1989, she became a writer/presenter for Sharjah TV- Sharjah in the United Arab Emirates, U.A.E. From 1990-1993 she was a news anchor for Radio Free Iraq in Jeddah, Saudi Arabia. She moved to the United States and began working for TV Orient in Detroit, Michigan.

Al-Aqidi moved to Washington, D.C. and worked for A.N.A. Radio and TV in 1994. In 1997, she began working for Al-Jazeera, then Voice of America, Radio Sawa, Al-Arabiya TV and Al-Hurra TV. In 2005, at the height of the Iraq War, she reported for Al-Hurra TV from Baghdad. A year later, she worked for the U.S. military in Iraq as a media advisor for Multi-National Security Transition Command Baghdad from March 2006 to April 2007, some of the deadliest years of the war.

In 2007, al-Aqidi worked in Beirut, Lebanon as a news anchor and weekly political talk show host for Sumeria Satellite TV, a job she held until 2014.

The newspaper said she “has the unique perspective of being the only Iraqi covering the presidential campaign as a member of the traveling White House press corps.”

2. Dalia al-Aqidi Is Running Against Democratic Minnesota Rep. Ilhan Omar Because She Says the Freshman Congresswoman Is ‘Dividing America’

Dalia al-Aqidi said she is running for Congress to unseat Democratic incumbent Rep. Ilhan Omar, a Somali refugee who she calls a “radical.”

“I’ve seen up close the consequences of what radical Ilhan Omar is doing. Conflict. Division. Oppression. I escaped that world once, and I won’t let it happen here. I’m running for Congress because we’re not as divided as Ilhan Omar and the far-left would have us believe. I’m running to bring us closer together,” she said on her campaign website.

“Dalia has seen the consequences of Omar’s version of an ideal government—she’s seen the kind of hatred it inspires and what it has done to the Middle East. That’s why Dalia felt that it was her responsibility to stop her—to stop the widening rift among Americans and instead unite our country under the values that she immigrated here for,” he campaign website says. “To put it simply, Ilhan Omar needs to be stopped. Her consistent anti-Semitic comments and hateful rhetoric towards America as a whole is doing untold damage to both Minnesota and the rest of the country. Every week, more scandal and corruption floods out of her office. Minnesota deserves a representative in Congress who is going to fight for their interests, not someone who is obsessed with raising their own celebrity profile.”

Ilhan Omar won the race by a landslide in November 2018.

3. Dalia Al-Aqidi Says She Will Work To Fight Homelessness and Gang Violence in Minneapolis

“I’ve done my homework for months and months before I decided to move here,” she told the New York Post in January. “On Thanksgiving, I helped feed more than 250 homeless people in Minneapolis, which she doesn’t remember. She doesn’t even talk about homeless situation in Minneapolis, which is extremely cold and there are not enough places of shelters for them to sleep in. It’s a very, very important problem in Minneapolis, and it’s getting very cold.”

She also told the New York Post that she would focus her campaign on fighting gang violence.

4. Dalia al-Aqidi Starred in an Iraqi TV Show Similar to the ‘Mickey Mouse Club’ and Said She Had a ‘Very Happy Childhood’ Growing Up in Baghdad/

According to the Chicago Tribune, Dalia al-Aqidi mother, Ghazwa Al-Alkhalidi, was an Iraqi actress and her father, Fakri Al Aqidi, worked in the Iraqi theater.

“For me, I lived a very happy childhood. I had everything, yet I always felt that something was missing,” Al-Aqidi said. “You always had to be careful. You cannot trust your best friend. You cannot even trust your family members. . . . You feel that your phone was tapped. You feel that you are being watched all the time, regardless of who you are and what you do.”

Al-Aqidi hosted and performed songs and dances on an after-school show similar to the “Mickey Mouse Club.” Her parents divorced when he was a young child. Her mother, the Chicago Tribune reported, asked Saddam Hussein, who was then the vice president of Iraq, if she could have custody of her daughter. Iraqi law stated that the child of divorce is automatically turned over to the father.

“He said, `You’ll have your daughter back,'” Al-Aqidi said. “He saved my life at that time because I couldn’t live with my father.”

Don’t insult our men and women in service. Millions of Iraqi, Lebanese, & Iranian children felt and suffered from the bombs and violence ordered by Qasem Soleimani. We are safer after his death. @IlhanMN, don’t speak about something you know nothing about. NOT IN MY NAME #MN05 https://t.co/IBuhqWm7GM

While people inside our Congress criticize @realDonaldTrump for targeting Soleimani, I urge you to see how ruthless this person was.

On Jan. 1, a U.S. drone strike killed Qasem Soleimani, the head of the Iranian Revolutionary Guard Corps’ Quds Force. “At the direction of the President, the U.S. military has taken decisive defensive action to protect U.S. personnel abroad by killing Qasem Soleimani, the head of the Islamic Revolutionary Guard Corps-Quds Force, a U.S.-designated Foreign Terrorist Organization,” the Defense Department said in a statement on Jan. 2.

Dalia al-Aqidi, who was born in Baghdad before moving to the United States and becoming an American citizen, said she supported the decision to take out the Iranian general.

“I was proud of President Trump and his Administration for ending the reign of Qasem Soleimani, who was a vicious terrorist and thug,” she told The Daily Wire. I was absolutely disgusted with how Democrats cheered on a terrorist. In times like this our country needs to rally together, not push each other apart. 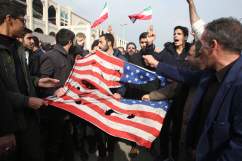 Loading more stories
wpDiscuz
0
0
Would love your thoughts, please comment.x
()
x
| Reply
Dalia al-Aqidi is an Iraqi-American journalist who is running as a Republican against Minnesota Democrat Rep. Ilham Omar, who is up for re-election in November. The primary for the House seat will take place on Aug. 11, 2020. Here's what you need to know.