Justin Riaz Williams is a former basketball manager at the University of Calgary who is accused of spitting on an Asian woman and calling her a racist slur in a viral video. Williams is facing charges in the incident, which happened July 18 at a park in the Ramsay section of the city, Calgary Police say. The woman was being filmed longboarding by her boyfriend when Williams rode past her on his bicycle, according to the video and police.

“All of a sudden I get a big spit on the side of my face and all over the side of my body,” the victim, Jessica Lau, told Global News. The video shows the cyclist, identified as Williams, calling Lau a “f****** c****,” a slur against Chinese and Asian people. Lau and her boyfriend said Williams also spit on a white couple after he passed them.

Calgary Police said in a news release that Williams, a 31-year-old Calgary resident, has been charged with three counts of assault and one count of possession of a weapon dangerous to the public. Police said, “multiple Calgarians were spit on. … A video of the incident was circulated online and the offender was quickly identified.”

Williams could not be reached for comment by Heavy and has not spoken out to other media outlets about the video, which has gone viral in Canada and beyond, or the pending charges.

Lau told Global News, “In my 27 years of living in Calgary, I’ve never experienced any kind of racism in my life. It was a big reality check for me and just kind of pointing out this is a thing that’s happening in the world right now. From the sources I’ve heard from, this isn’t the first time he’s done something like this. But it’s going to be his last.”

Here’s what you need to know about Justin Williams:

1. Williams Can Be Seen in the Video Riding His Bike Around a Corner and Spitting Directly at Lau Before Using the Racial Slur & Continuing on His Way

STILL THINK RACISM DOESN’T EXIST IN CANADA!?!? UPDATE: Although Jess and I haven’t heard from the police themselves, the news are reporting that he is now in custody awaiting charges. This man spit on my girlfriend @itsjesslau DURING A PANDEMIC and called her a “fucking ch*nk” and sped off on his bicycle. We are outraged. He also did this to another couple behind us who were Caucasian. I can’t believe I caught this on video. So much for a Saturday night out hey? If you or someone you know has any information as to who this is please pass it on. The worst type of person. We are forwarding it to CPS. EDIT: The police have filed many claims of this guy doing the same thing to a lot of people. They’ve identified him and I believe charges will be made. Thanks for the positivity everyone!

The Calgary Police Service said, “The incident happened on Saturday, July 18, 2020 at approximately 8 p.m., on a pathway in the community of Ramsay. During the incident the offender, while unprovoked, allegedly spat on at least three separate individuals and used racial slurs. A witness confronted the offender, who then threatened the witness with a weapon.”

The video was posted on Instagram by Lau’s boyfriend, Braeden Riehl, on the day of the incident. Riehl wrote as the caption on the video, “STILL THINK RACISM DOESN’T EXIST IN CANADA!?!?” Riehl added in the post:

This man spit on my girlfriend @itsjesslau DURING A PANDEMIC and called her a ‘fucking ch*nk’ and sped off on his bicycle. We are outraged. He also did this to another couple behind us who were Caucasian. I can’t believe I caught this on video. So much for a Saturday night out hey? If you or someone you know has any information as to who this is please pass it on. The worst type of person. We are forwarding it to CPS.

Riehl wrote, “The police have filed many claims of this guy doing the same thing to a lot of people. They’ve identified him and I believe charges will be made. Thanks for the positivity everyone!”

Erica Wiebe, a Canadian Olympic wrestling champion, said on Twitter she was also attacked by Williams. Wiebe tweeted, “I was also spit on by a shirtless man wearing sunglasses and biking around at the same time and place yesterday. … Unfortunate that this happened in our community and hopefully the individual is getting support and help they clearly need. Standing in solidarity with the other women involved.”

Wiebe told the CBC she was walking with her partner along the bike path when the incident occurred. “I looked up and this guy was lining up to spit on me. He did, I turned away, it didn’t make contact, and he just kept on biking by. We were just flabbergasted,” she said. “ever in my life have I experienced something like that. Me and my partner talked about it, we were like, ‘can you imagine being someone who faces discrimination and may experience that as a reality more often than not.’ It’s crazy to think about.” 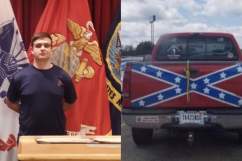 2. Williams Has Not Worked at the University of Calgary Since February & the School Condemned His Actions

Williams had been listed on the University of Calgary Dinos website as being the manager for the school’s basketball team. Several people on social media sent messages to the school after the video went viral.

On Twitter, University of Calgary issued a statement saying, “We strongly condemn the actions in this video and join the community in extending our support to victims Jessica and her boyfriend. Justin Williams has not been an employee of UCalgary since February and his past social media comments were reported to CPS by our staff.”

We strongly condemn the actions in this video and join the community in extending our support to victims Jessica and her boyfriend. Justin Williams has not been an employee of UCalgary since February and his past social media comments were reported to CPS by our staff.

Williams is originally from the town of Okotoks, Alberta. Williams deleted his LinkedIn profile and Facebook page after the video went viral. The University of Calgary said past social media statements made by Williams have been turned over to the police as part of the investigation into the incident.

According to his now-deleted LinkedIn profile, Williams has worked for the Dinos basketball team since 2017, before being removed from his position. He previously worked as a motor hand at a drilling rig contractor from 2012 to 2015 and as a membership advisor at a gym from 2011 to 2012. He was studying economics at the University of Calgary from 2015 to 2020, according to his LinkedIn.

Williams also was a youth mentor for the Calgary Family Service from 2018 to 2019, the head coach of the Rockies basketball team in the Calgary Minor Basketball Association from 2014 to 2017 and a student volunteer at the Southern Alberta Risk and Insurance Management Society from 2016 to 2018, he said on LinkedIn, before taking down the page.

3. Lau Said She Has Received an Outpouring of Support After the Incident With Williams & Says He Is ‘Ill Inside’ & She Hopes He Gets the Help He Needs

Lau posted a video on Instagram Sunday night about the incident. She said, “I wanted to say thank you to the amazing community for all the love and support that everyone has shown and for helping to identify this man before the day even ended yesterday. So, huge thank you, wouldn’t have been able to do it without everyone here.” She added:

The police have updated us and there are current pending charges against him for obviously the actions that he did. The biggest thing for me now is that he doesn’t have a chance to do this to anyone else. I didn’t take it personally, I know he’s ill inside and needs help. But I’ve had so many DMs (direct messages) reaching out to me and to my boyfriend who recorded it saying they have, seen him do it before, have a friend who actually experiened that or they themselves have been spat on and called something mean.

Lau said, “The fact that I do know he is going to pay for his actions just puts my mind at rest and I hope that it helps everyone else as well.” She said others who reached out to police and filed reports about other incidents involving Williams helped lead to his arrest. “Thank you to everyone who has shown the most love and support, Calgary is beautiful,” Lau said in the video.

Riehl wrote on Instagram, “It’s incredibly inspiring to see that a large percentage of people don’t condone what happened. It’s good to band together and make sure everyone knows that Canadians and Calgarians do not accept intolerance, abuse or bull— in any kind of way.” 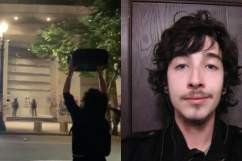 4. Williams Used Racist & Homophobic Slurs in Conversations With a Former Friend, Who Posted the Screenshots on Reddit

A former friend of Williams posted on Reddit after the incident, and shared screenshots of conversations with Williams in which the ex-basketball manager used slurs and made hateful comments. The friend wrote on Reddit that Williams changed his name from Riaz Ali about five to seven years ago:

His mom is white (English descent) and his dad is biracial (Trinidadian half Indian and half Black). He was raised by primarily his mom in this small farming community just south of Calgary. I know him personally. I discontinued relations with him due to racist, bigotry, and homophobic rhetoric. He would always get mad when people confused what he was racially. Especially when they identified solely as black, middle eastern/ North I African looking, or Hispanic. He makes it well known he is mixed and what he was mixed with, in fact he looks down on people who are mono-racial. He believes mixed raced people are the ‘superior race,’ he said that to me in a conversation we were having once. Basically he has the mindset of Hitler. He has told me he hates gay people, basically all non-mixed race people, mixed-race people who identify as one race, and women in Calgary.

The friend posted screenshots of chats he had with Williams on Snapchat before he blocked him earlier in 2020. In the chats, Williams made racist, homophobic, bigoted and misogynistic comments.

He wrote about women in Calgary, “Women have no respect for men these days. At this point in the game if a woman doesn’t think I’m attractive I assume she is either a lesbian, racist or complete moron.”

5. Authorities Say Williams Could Be Charged With Aggravated Assault for Spitting on Lau Because of the COVID-19 Coronavirus Pandemic

Calgary Police Sergeant Jim Dalidowicz told The National Post that Williams could be charged with aggravated assault because of the COVID-19 coronavirus pandemic and the risk of spreading the virus through spit.

Dalidowicz told the Calgary Herald police have seen an uptick in reporting of racist incidents and hate crimes in recent months, following anti-racism demonstrations in the city. He told the newspaper, “I think people are standing up for it now more than anything.”

Calgary Police said in its statement, “The investigation is ongoing and additional charges are possible as the investigation continues. As is done with all files that could have a possible motivation of hate, bias or prejudice, the CPS Hate Crimes Coordinator will review this investigation.”

Loading more stories
wpDiscuz
0
0
Would love your thoughts, please comment.x
()
x
| Reply
Justin Riaz Williams is a former basketball manager at the University of Calgary who is accused of spitting on an Asian woman and calling her a racist slur in a viral video.