Ian Christopher Baunach is the Florida man accused of killing his ex-wife before cremating her body on his property. Katie Samantha Baunach, 39, was reported missing on September 30. Detectives with the Hendry County Sheriff’s Office said investigators have confirmed that the human remains found on Ian Baunach’s property were those of Katie.

1. Ian Baunach Argued With His Ex-Wife on the Last Night She Was Seen Alive, He Told Investigators 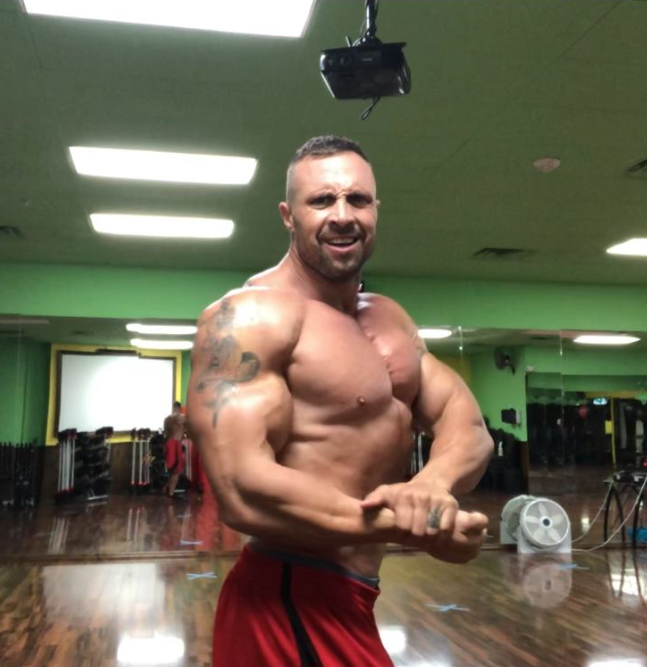 FacebookIan Baunach is accused of killing his ex-wife at his home. He denies the charges.

A witness told police she last saw Katie Baunach alive on Thursday, September 29, according to a news release from the Hendry County Sheriff’s Office. The friend had been watching Katie’s two children, whom Katie shared with Ian.

The friend said she was babysitting the two children while Katie went to Ian Baunach’s house to pick up some personal belongings. According to a federal criminal complaint, Katie dropped off the children around 9 p.m. on September 29. The report states, “This was the last time Katie Baunach was seen alive.”

Katie never returned to pick up the children. The friend called the Hendry County Sheriff’s Office the next morning, September 30, and told deputies she was “concerned” for Katie’s safety. According to deputies, other friends and family members reported they had not heard from Katie either and that she was not answering her cell phone.

Deputies went to Ian Baunach’s house but no one answered the door. The federal complaint says law enforcement found Katie’s vehicle in the driveway. Her purse was also inside the vehicle. Deputies left the property for a short time and when they returned, Katie’s vehicle had been moved to the street.

According to the Hendry County Sheriff’s news release, deputies then obtained a search warrant to search the house. The release did not provide details about when deputies eventually made contact with Ian Baunach.

Investigators said they found “a large number of steroids” inside the house and that Baunach admitted the steroids belonged to him. He was arrested and charged with 13 counts of possession of a controlled substance without a prescription. Inmate records show Baunach was booked into the Hendry County Jail on October 1. 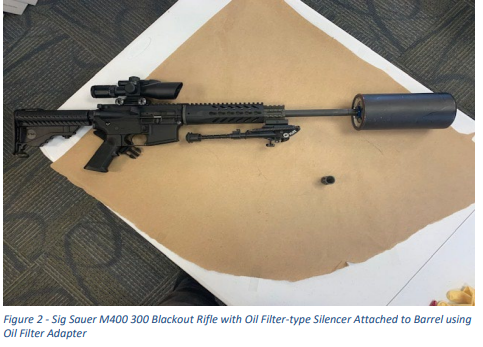 U.S. District CourtIan Baunach is charged in federal court with possession of an unregistered firearm.

According to the federal complaint, Baunach waived his Miranda rights and agreed to speak with investigators on October 1. He said Katie Baunach had called him about needing gasoline for her vehicle. He admitted she had been at his house and that they had argued about another woman. Ian Baunach said he went to bed “because he did not want to argue,” claimed Katie was gone by the time he woke up, and that he had moved her vehicle off his property.

2. Blood & Evidence of a Physical Struggle Were Found Inside the House & in Ian Baunach’s Vehicle, Federal Officials Say 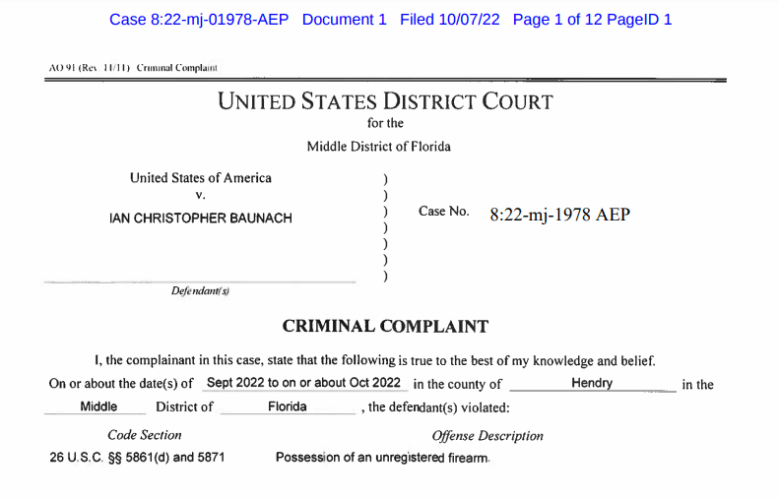 The federal criminal complaint filed in the Middle District of Florida contains additional details about what investigators found when they searched Ian Baunach’s house in Hendry County, Florida. The report says law enforcement received a second search warrant after discovering “evidence that a homicide had occurred there.”

Deputies said they also found evidence of a physical struggle in the hallway between the garage and the foyer. According to the complaint, investigators observed damage to the wall, “exposed screws in the wall where an object appeared to previously be mounted” and a broken mirror. They also found more evidence of blood in the hallway and on three different walls.

According to the complaint, Baunach said any blood inside his vehicle “was due to groceries that he had transported.” He denied the presence of blood inside the house, and claimed the mirror was broken because he had bumped into it.

Ian Bauanch also disputed the idea that Katue Baunach was a “missing person.” According to the complaint, Ian Baunach stated that law enforcement “did not have a body.”

3. The Remains of Katie Baunach’s Body, as Well as Her Wedding & Engagement Rings, Were Found on Ian Baunach’s Property 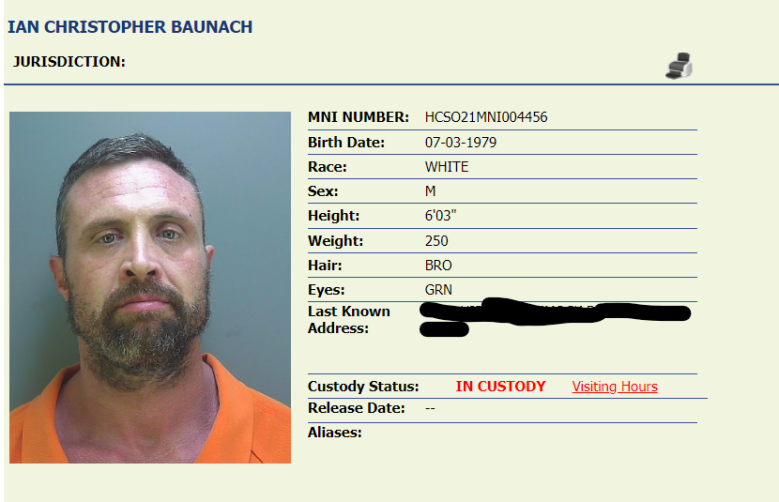 The Hendry County Sheriff’s Office revealed that detectives found human remains on Ian Baunach’s property on October 1 and that the remains were identified as belonging to Katie.

The federal complaint included more detail. Officials claimed Katie Baunach had been wearing her wedding band and engagement ring when she left her friend’s house on September 29. Both rings were discovered inside a safe at Ian Baunach’s house. The federal complaint also states:

In addition to the 13 charges for possession of a controlled substance without a prescription, inmate records show Ian Baunach also faces the following state charges:

Ian Baunach has denied killing his ex-wife and entered a plea of not guilty, WFTL radio reported. Inmate records show he is being held at the Hendry County Jail without bond.

NBC News reports Baunach has been assigned a public defender. A preliminary hearing was scheduled for the third week of October.

4. Katie Baunach Filed for a Restraining Order Against Her Ex-Husband on Behalf of One of Their Children Shortly Before Her Death

A Florida bodybuilder has been accused of incinerating his ex-wife in a backyard. https://t.co/p4gZT6Bruk

Shortly before her death, Ian and Katie Baunach had some sort of disagreement over their children. According to the federal criminal complaint, she accused Ian Baunach of physically abusing one of their children. The complaint states that Katie Baunach “received an injunction for domestic violence against” her ex-husband on behalf of the child.

The restraining order was discussed during Ian Baunach’s October 1 interview with law enforcement. According to the federal complaint, he told investigators he was “angry that Katie Baunach filed for and received a domestic violence injunction against him.”

Hendry County JailIan Baunach was arrested for battery in November 2021.

Hendry County Sheriff’s Office records also show Ian Baunach was arrested in November 2021 for domestic battery by strangulation. He was released on $25,000 bond. It was not immediately clear whether or how that case was resolved. 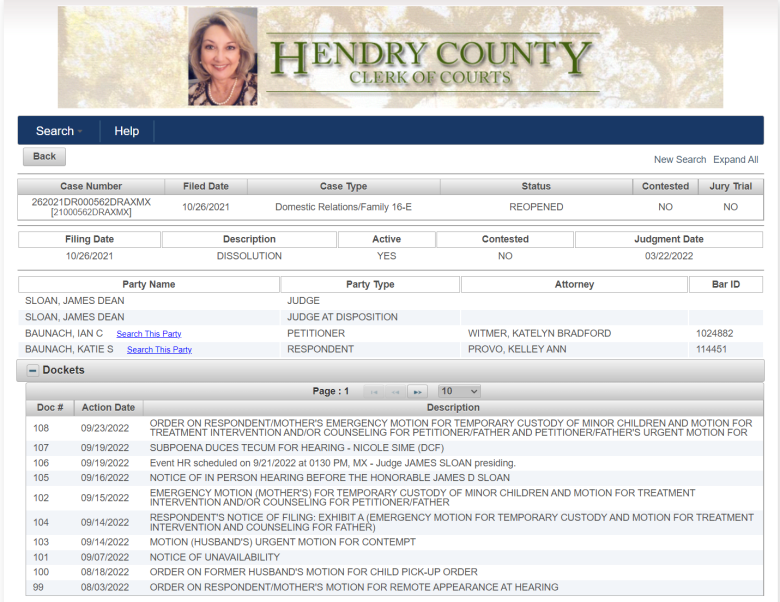 Hendry County Clerk of CourtsoiCourt records show Ian and Katie Baunach split in 2021 and she requested counseling for him.

Records available on the Hendry County Clerk of Courts website show Ian Baunach filed for divorce in October 2021. He is listed as the petitioner and Katie as the respondent.

In September 2022, Katie Baunach filed an “emergency motion” for custody of their two children. The record shows she also wanted the court to require Ian Baunach receive “treatment intervention and/or counseling.”

According to TMZ Sports, Ian Baunach competed as a bodybuilder in Florida. The outlet also identified him as a former Marine.