Retired trans MMA fighter Fallon Fox is calling out Joe Rogan for recent comments he made on “The Joe Rogan Experience” podcast about transgender people. Fox was previously targeted by the longtime UFC commentator on his show in 2013, with Rogan calling her a man and saying “she’s not really a she.”

Fox, responding to a Bloody Elbow article about comments Rogan made during a March 2021 interview with fellow comedian Jim Breuer, wrote on Facebook, “Joe Rogan is being transphobic yet again. He has had more transphobic episodes than you can shake a stick at. Spotify needs to cancel his show already.”

During the conversation with Breuer, Rogan said about the trans community, “The problem is it becomes a protected subject and then you get praised for transferring your gender, for changing your gender. And then it gets exciting for people to talk about, and then you get chastised for even discussing it in any weird way.”

@PadmaLakshmi Will you call on @Spotify to drop @JoeRogan from his $100m contract? Rogan devotes hours of his pod to echo transphobic talking points. On his recent broadcast he called trans kids "generally dumb people" & "idiots" who "transfer over…to get praised." pic.twitter.com/x7tWadeOIh

Rogan said about trans people, “And then people who were marginalized for being, like, generally dumb people, if they transfer over and become another gender, then they get praised. There’s been a lot of people who are, like, idiots, but then they become trans, and now all of a sudden we think they’re amazing.”

Rogan earlier said about trans people, “This has always been a thing, but it has been taboo and hidden for the most part.” He told Breuer, “It’s not fake.” Rogan later said about transitioning, “Human beings if they want to do this as an adult, and they know for a fact they want to do it as an adult, then they should be able to make their own choices. But when you have really young children and you have all this reinforcement from people and trans activists, like literally encourage people to do this, you can’t quantify what’s going on inside a person’s mind.”

Rogan added, “I think the problem is for some people it is the right choice. If you got them on hormone blockers and then they transition to become a woman they might ultimately be happier. But they might not too. And so when you’re in this position where you talk about a minor, and you use absolutes, like ‘this is where they want to be,’ ‘this is their true gender,’ ‘this is what they should do’ and then you encourage them and you lead them along, you’re in this weird place when you talk to young people, you can encourage young people to do a lot of things because they’re very malleable, young people are very easily influenced.”

Fox, who was the first openly trans athlete in MMA history, retired in 2014 with a record of six wins and one loss, by knockout. Fox served in the U.S. Navy before transitioning in 2006. In 2013, after her first two career MMA fights, Fox came out as trans, according to Outsports. Fox was criticized by several in the MMA community, including the top female fighter at the time, Ronda Rousey, who said she had an “unfair advantage.” Rogan’s comments about her sparked controversy.

Rogan said on his podcast in 2013, according to Bleacher Report:

Rogan, with Breuer in March 2021, talked about trans athletes. Rogan said, “It’s bananas, but yet they’re saying, Scientific America just had a story about it, ‘We must allow transgender athletes to compete in the sex that they identify with.’ Well no, we don’t. That’s crazy. We must protect biological women. There’s a reason biological males are not allowed to compete with biological women. It’s because they have certain physical advantages. That’s why we have boys sports and girls sports. Now, just because someone that identifies as being trans, should we treat them like they’re a woman or like they’re a boy? Yes we should, but we should recognize that when we’re talking about athletic competition we’re talking about a completely different thing.”

Rogan added, “We’re dealing with physical bodies competing against physical bodies. And yes, there’s a spectrum in physical bodies, and there’s some women that are going to be superior athletically and there are some women that they just don’t have good bodies for sports. The same thing with males. The difference in the spectrum is, if you took a world class sprinter as a woman, top of the food chain, Olympic gold medalist, there are high school athletes that will bury her as males. Male high school athletes that you can take the best sprinter in the world and you’ll find 100 male high school, 15-year-olds, who will leave her in the dust, because they’re built different.” 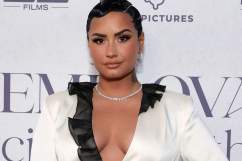 Rogan Has Recently Said He Supports Trans Rights, but ‘Not at the Expense of Other People’

Joe Rogan @joerogan is being transphobic yet again. He’s had more transphobic episodes than you can shake a stick at. Spotify needs to cancel his show already. https://t.co/bNEhmOVVW8

Rogan has previously addressed calls from Spotify employees who were angered by the streaming company’s decision to sign him to an exclusive deal. Rogan was specifically called out for interviewing anti-trans writer Abigail Shrier in July 2020. Rogan mentioned Shrier during his March 2021 conversation with Breuer.

Rogan told former CIA officer Mike Baker earlier in March 2021, “I 100% support gay rights, I 100% support women’s rights, civil rights, trans rights, across the board. But not at the expense of other people.”

Rogan told comedian Fahim Anwar in February 2021 that when he moved to Spotify, some employees protested against him, calling him transphobic. “There’s been a lot of weirdness. You know we were talking about how people get a sense of who a person is without actually communicating with them, without being there with them and you can define someone or have this like distorted perspective of who someone is without actually communicating with them,” Rogan said.

“They thought I was transphobic or thought I was a bad person,” Rogan told Anwar during the podcast episode. “I don’t know what the actual conversation has been from Spotify talking to these employees, but if these employees are listening, I would tell you emphatically I am not in any way anti-trans. Not in any way. I am 100% for people to be able to do whatever they want as long as it doesn’t harm other people. If you choose to do anything, whatever you want, whatever your personal choice is, I am happy if you’re happy.”

Loading more stories
wpDiscuz
0
0
Would love your thoughts, please comment.x
()
x
| Reply
Retired MMA fighter Fallon Fox, who is trans, called out Joe Rogan for recent comments on his podcast, saying he is "being transphobic yet again."