President Donald Trump and first lady Melania Trump have tested positive for COVID-19, a fact that was confirmed via tweets from the president and the first lady. News of the diagnosis broke in the early morning hours of October 2, and Melania Trump tweeted that the pair felt fine.

However, Donald Trump is 74 years old, which puts him in a higher risk category for coronavirus. In addition, Trump weighed 244 pounds in June and is 6-foot-3-inches tall, according to the New York Daily News. That technically classifies him as obese, and obesity is a risk factor for COVID-19. Melania Trump is 50 years old.

According to the Centers for Disease Control and Prevention, the number of deaths from COVID-19 increases with age. As of September 26, the date through which the CDC chart offers data, there have been 41,866 deaths of people age 65 to 74 years in the United States. That’s 22% of the total 194,091 COVID-19 deaths reported as of September 26. More men have died of COVID-19 in that age range than women, according to the CDC.

Number of deaths reported in this table are the total number of deaths received and coded as of the date of analysis and do not represent all deaths that occurred in that period. Counts of death occurring before or after the reporting period are not included in the table. *Data during this period are incomplete because of the lag in time between when the death occurred and when the death certificate is completed, submitted to NCHS and processed for reporting purposes. This delay can range from 1 week to 8 weeks or more, depending on the jurisdiction and cause of death. 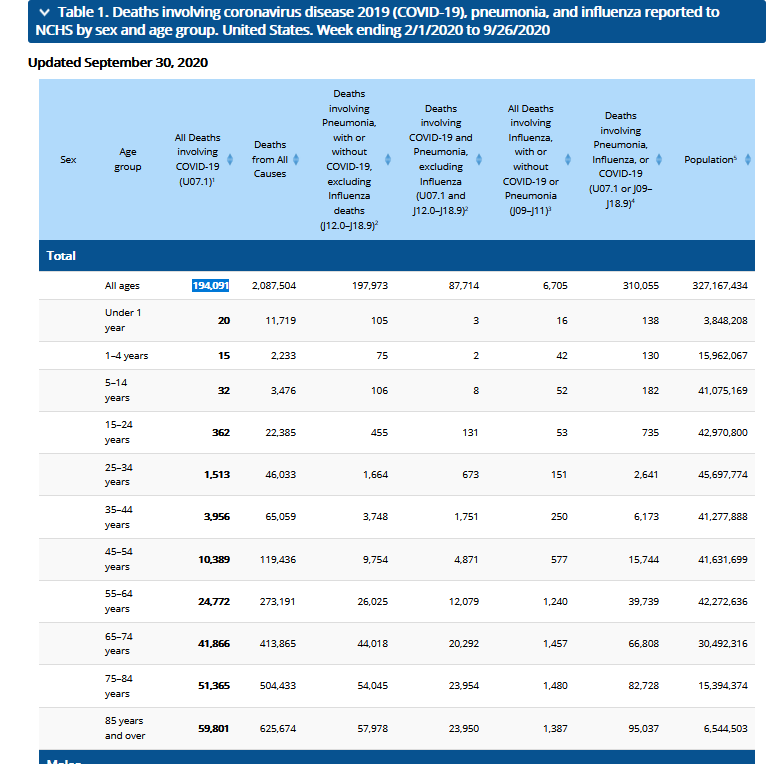 The timeline of when President Trump came down with the virus is in dispute; his doctor initially said in a press conference on October 3 that the president was 72 hours into his diagnosis, but the White House later clarified that the president tested positive on Thursday October 1. “This morning while summarizing the President’s health, I incorrectly used the term ‘seventy two hours’ instead of ‘day three’ and ‘forty eight hours’ instead of ‘day two’ with regards to his diagnosis and the administration of the polyclonal antibody therapy,” the president’s doctor, Sean Conley, later said. “The President was first diagnosed with COVID-19 on the evening of Thursday, October 1st and had received Regeron’s antibody cocktail on Friday, October 2nd.”

The Centers for Disease Control and Prevention says of COVID-19: “The estimated incubation period is between 2 and 14 days with a median of 5 days.” On Saturday, October 3, there were conflicting reports of the president’s health. According to The New York Times, the White House chief of staff reported that Trump’s vital signs were “very concerning” and he’s not out of danger. That same day, Trump’s doctors said the president was ” “doing very well” and in “exceptionally good spirits.”

“The president’s vitals over the last 24 hours were very concerning and the next 48 hours will be critical in terms of his care,” Chief of Staff Mark Meadows said, according to The Times. “We’re still not on a clear path to a full recovery.” Sources told The New York Times that “the president had trouble breathing on Friday and that his oxygen level had dropped, prompting his doctors to give him supplemental oxygen.” His doctor said Saturday he didn’t need oxygen now but didn’t clarify whether he ever had, The Times reported.

The CDC also released a chart called “COVID-19 Hospitalization and Death by Age” that was last updated on August 18. It contains “rate ratios compared to 18-29 year olds” for each age range. For Trump’s age range, the rate ratio for hospitalization was 5 times higher and for deaths it was 90 times higher. About 85% of those who died of COVID-19 in the U.S. were age 65 or higher.

The article reported that older men are more at risk of dying of COVID-19 but cautioned that underlying conditions are a factor. Some have raised questions about how COVID-19 deaths are tracked. The site reported that studies have found differences among countries due to health care access and living conditions.

Trump previously “took a two-week course of the malaria drug hydroxychloroquine,” despite controversies over that drug, and took zinc and vitamin D, according to Web MD.

“Tonight, @FLOTUS and I tested positive for COVID-19. We will begin our quarantine and recovery process immediately. We will get through this TOGETHER!” Trump wrote on October 2.

Tonight, @FLOTUS and I tested positive for COVID-19. We will begin our quarantine and recovery process immediately. We will get through this TOGETHER!

“As too many Americans have done this year, @potus & I are quarantining at home after testing positive for COVID-19. We are feeling good & I have postponed all upcoming engagements. Please be sure you are staying safe & we will all get through this together,” first lady Melania Trump wrote on Twitter.

Trump previously tweeted that aide Hope “Hope Hicks, who has been working so hard without even taking a small break, has just tested positive for Covid 19. Terrible! The First Lady and I are waiting for our test results. In the meantime, we will begin our quarantine process!”

The president’s doctor, Sean Conley, wrote in a statement, according to CNN:

The President and First Lady are both well at this time, and they plan to remain at home within the White House during their convalescence. The White House medical team and I will maintain a vigilant watch, and I appreciate the support provided by some of our country’s greatest medical professionals and institutions. Rest assured I expect the President to continue carrying out his duties without disruption while recovering, and I will keep you updated on any further developments.

According to CNN, Trump seemed fine when he was last seen in public on Thursday afternoon.