In The Thirteenth Year, a 1999 Disney Channel Original comedy-drama directed by Duwayne Dunham, the adopted teenager Cody Griffin (Chez Starbuck) has just turned 13, and some strange changes are happening in his body—he begins to grow scales and fins, turning into a merman! As if being thirteen weren’t hard enough. And now, The Thirteenth Year is as easy to watch as ever, as it just launched with Disney Plus this morning.

Cody learns his birth mother is a mermaid, and she has returned to help him through these changes—but his adoptive mother doesn’t want to lose him. How will Cody learn to cope with his heritage as a merman and still be a normal thirteen-year-old? Watch The Thirteenth Year online, and read on in The Thirteenth Year streaming guide to find out more about the cast, what the critics think, and more.

Here’s how to stream The Thirteenth Year right now:

How to Stream ‘The Thirteenth Year’ – Exclusively on Disney+

The Thirteenth Year is one of the classic Disney Channel original movies that will be streaming exclusively on Disney’s new subscription streaming service, Disney+.

You can sign up for Disney+ HERE, which will allow you to stream The Thirteenth Year and hundreds of other movies and shows on your computer, phone, tablet, smart TV or streaming device. The service costs $6.99/month. You may also opt for this discount bundle of Disney+, Hulu and ESPN+ for $12.99/month.

How Long Is ‘The Thirteenth Year’?

The Thirteenth Year was released as a 95-minute Disney Channel Original Movie.

Cody Griffin (Chez Starbuck) has just turned 13, and things are going great. He has a supportive adoptive family, he’s getting friendly with a girl named Sam, and he’s discovered his talent as a swimmer. Unfortunately, he’s failing biology, so he is paired with class nerd and marine biology expert Jess Wheatley. When Cody starts noticing some strange changes in his body, including that he grows scales and fins when he gets wet, he enlists Jess’s help. Jess determines he’s turning into a merman! When Cody’s fish-like features appear as he wins a big swim meet and breaks the state speed record, he can’t hide it any longer.

People are talking, and Cody’s love interest, Sam, is freaked out. The next morning Cody takes a swim at the beach and meets his birth mother—a mermaid (played by Stephanie Chantel Durelli) who years before left him on the Griffins’ boat to help keep him safe. Jess’s father Big John—a fisherman who saw the mermaid leaving Cody years before and became obsessed with finding the mermaid—sees them and interrupts the reunion.

Later, Cody confesses to Sam and brings her into the water to introduce her to his mother. Suddenly he is struck with pain, and as Sam runs to find his parents, Cody’s feet turn to flippers. When someone throws a blanket over him, Cody thinks his parents have come. But it turns out to be Big John, kidnapping him to use him as bait for his mermaid mother so Big John can prove to everyone he hasn’t been crazy all these years. Jess discovers what has happened and gets to his father’s boat to try to help Cody, but they can’t stop Cody’s mother from getting caught in a net. Jess jumps in and frees her but is caught himself and nearly dies, but Cody saves his life.

His mermaid mother returns to help him as he turns into a merman—she’s the only one who can. But his adoptive mother doesn’t want to lose him. Cody promises to return before school starts again, and the mer-mother and mer-son pair swim away together. 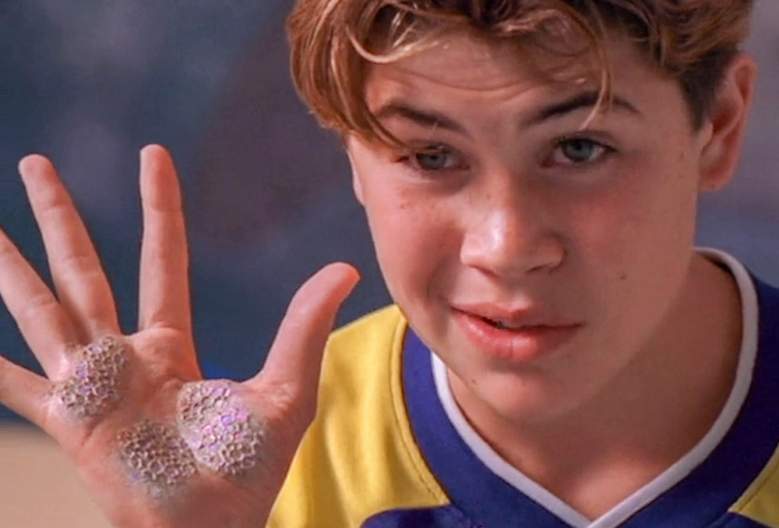 The Thirteenth Year was star Chez Starbuck’s first major role and featured several well-known actors. Here are some of the main players.

Cody Griffin is just a normal 13-year-old boy—or is he? In addition to The Thirteenth Year, his first acting credit, Starbuck is known for his roles in the television series Undressed and the movie Time Share.

Jess Wheatley is the class nerd with the mermaid-obsessed father who starts by coaching Cody in biology and ends up becoming his best friend. Ross has 28 acting credits, including a role in the 1994 movie Little Giants and the 2001 movie Zigs.

Courtnee Draper’s Sam is Cody Griffins’ love interest who, unlike the movie’s other main characters, inexplicably doesn’t have a last name. Draper has voiced characters in at least nine video games and is known for her roles in The Bold and the Beautiful, the television series The Jersey and as the voice of KG in the 2009 animated movie The Prodigy.

Fisherman Big John Wheatley knows he saw a mermaid 13 years ago, but everyone thinks he’s crazy—until Cody Griffin turns into a merman. Briscoe’s more than 90 acting credits include his roles as Detective Dave Macklay in the 2017 Twin Peaks television series reboot, in the 2014 comedy-horror Zombeavers, and appearances in some of the most popular television series of the past two decades.

Whit Griffin is Cody’s adoptive father who, along with adoptive mother Sharon Griffin (Lisa Stahl Sullivan), provide a supportive home for Cody. Coulier is known and loved by millennials for his role as Uncle Joey Gladstone in the television series Full House. With credits dating back to 1982, Coulier has voiced characters in the animated series Robot Chicken, American Dad!, Muppet Babies, The Real Ghostbusters and Voltron: Legendary Defender.

‘The Thirteenth Year’ Songs and Soundtrack

‘The Thirteenth Year’ at the Box Office

With its May 1999 premiere, The Thirteenth Year became Disney Channel’s second-highest rated original movie to date. That summer a promotional tour for the movie visited dozens of cities throughout the United States. The movie was released on VHS in 2001.

‘The Thirteenth Year’ Reviews – What the Critics Said

Critics found The Thirteenth Year amusing if “creepy” and noted that Starbuck’s acting could use some improvement. Entertainment Weekly listed The Thirteenth Year among Disney Channel Original Movies featuring “horrifying transformations that symbolize puberty” A 2016 Medium.com review says the movie “isn’t particularly exceptional”—it doesn’t feature any big stars and doesn’t take on major issues like many other Disney Channel Original Movies do. But, says writer Benjamin Austin, he still watched the movie many times as a kid.

Where ‘The Thirteenth Year’ Fits in the Disney Movie Pantheon

BuzzFeed ranked The Thirteenth Year at #23 in its “definitive” 2014 list of 55 of Disney Channel Original Movies. The film was the first starring role for Chez Starbuck and was the first movie appearance for actress Kristen Stewart, who had an uncredited extra role. The film debuted in 1999 and was the Disney Channel’s second-highest rated film to that point. The movie’s ending left open the possibility of a sequel, but that hasn’t happened yet—although as recently as 2016 Starbuck talked about his concept for a sequel.

The Thirteenth Year was the first movie appearance for two of its actors, one of whom went on to become a major Hollywood name after serving as an uncredited extra in this film. Here’s what you need to know.

The Thirteenth Year premiered in 1999, making actor Chez Starbuck—born Caesaray Sarnella—one of the earliest stars of a Disney Channel Original Movie. When Disney discovered Chez, he was a kid anchor on the television news in Los Angeles.

2. The Thirteenth Year was the first movie role for actress Kristen Stewart.

Stewart plays the uncredited role of Girl in Fountain Line, one of the exasperated students waiting in line when Cody takes an extraordinarily long drink at the school water fountain. Stewart’s mother, Jules Stewart, was the film’s script supervisor. Stewart went on to star as Bella Swan in the 2010-2012 The Twilight Saga movie series and have acting roles in more than 50 other movies and shows.

3. Disney never made a sequel, but Starbuck has an idea…

In a 2016 interview with MTV, Starbuck shared his idea for a sequel to The Thirteenth Year. “I always just thought that [Cody] went to the ocean and had his own family … and came back,” Starbuck told MTV.

Viewers may recognize Dunham’s name as director of the movies Homeward Bound: The Incredible Journey, Little Giants (which included two of the actors later cast in The Thirteenth Year) and Halloweentown and editor of Star Wars: Episode VI – Return of the Jedi.