With the release of Stormblood, Final Fantasy XIV players were greeted with a bevy of new content to explore. It’s still early in the life of Stormblood so players are finding themselves doing the Deltascape raid and doing the two extreme trials over and over again.

There are benefits to fighting Susano multiple times, however. If you get lucky enough, you could get an iLvl 320 weapon from him along with a mount that bears an uncanny resemblance to Okami. Whatever your reasons for doing the fight are, it’s important to know a few things before you start. We recommend you watch a video of the fight before you actually dive in, especially if you want to avoid getting raged at for not knowing mechanics. MrHappy is a popular FFXIV video maker and he usually has videos of important fights up.

Without further ado, here are our tips for taking down Susano on extreme difficulty.

I know we just mentioned this but this a very important thing to do. He features many mechanics that can make or break your party. We have the dice, as an ability called Churn. that appear over your head, which means you have to stand still as the debuff is ending or you’ll take massive damage. He also has a couple tankbusters that don’t take any time to wind up so you also have to watch out for those.

This part is probably the easiest of the phases. Once the battle begins we should have the main tank take Susano and turn him around. The tank will get hit by a tankbuster pretty early so the healers should be prepared for that. He will cast Churn a couple times so be careful if you’re the one with the dice forming over your head. With the second Churn, he will also summon several whirlpools you’ll have to dodge along with Churn. He’ll do his part the sea move a few times and after the last one, he’ll do a couple auto attacks and hit the tank with another tankbuster and this phase will end. In my experience, having Susano lower than 80 percent health by the end of this phase is ideal.

Phase 2 is where things start to get weird. Susano jumps into the sea and brings forth a giant sword to crush the party. Everyone should group up in the middle and the main tank needs to trigger “Blade’s Shadow” to catch the sword and they will need to mash the click button to keep the sword from crushing everyone.

During this, the off-tank should be picking up the various orbs before they make it to the party and deal extreme damage. One healer should be focusing on AoE heals for the party and the other should be focusing on keeping the off-tank alive. While all this is happening, the DPS players should be attacking the sword and destroying it as fast as possible. The tanks will then switch positions once the sword is destroyed and repeat the process. After the second sword is destroyed, players will move to the side and the healers should pop some AoE healers as Phase 3 begins.

Phase 3 is usually where things go downhill in a hurry for pick-up groups. Susano enters this phase with his full arsenal of mechanics along with a new Levin Bolt one. Players will be marked with a purple marker which indicates a Levin Bolt will be hitting them. The player marked with this will have to go across the black strip dividing the stage in order to prevent the party from all taking damage from the bolt. Players will sink in the divider so make sure not to set up shop there. Occasionally players will be rooted by the Levin Bolt and this means the whole party will have to switch to the other side.

Susano also feature his Stormsplitter tankbuster move which does heavy damage. The tanks should swap after every Stormsplitter since it does so much damage. It has a long wind-up so healers should be able to quickly heal if they are paying attention. Cure 3 and Medica are your friend with this part if you’re playing as a White Mage.

Eventually, one of your party members will be trapped in a rock that the team will have to attack. If the player isn’t freed in time, he or she will die and that’s never good. Luckily, the rock the player is trapped in is usually the last rock on the aggro list so you should be able to identify the player if the rock doesn’t get marked.

After this, Susano basically repeats these mechanics over and over. There will be a part where Churn pops back up along with the splitting tide move so watch out for that. I’ve seen many parties wipe during that part. You also have to be very alert regarding the positioning of the cloud. It might take a few times but a competent group shouldn’t have a problem clearing this fight if everyone knows the mechanics. 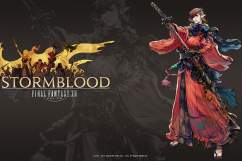