A lot of people get a toaster or towels when they get married, but when you marry the nephew of one of the world’s wealthiest men, your presents get a lot better.

And since Kate Winslet married Ned Rocknroll, the oddly named nephew of multi-billionaire Sir Richard Branson, her wedding present is a freaking trip to space.

The Virgin owner gave the couple an exclusive ticket on the highly anticipated Virgin Galactic tour to space. They will fly with other luminaries, including Russell Brand, Ashton Kutcher and Stephen Hawking when the tour takes its two hour flight 60 miles above Earth. 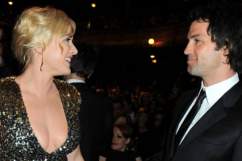 The ticket costs 124,000 Euros, or just over $200,000 in American dollars. That’s a lot better than a fondue pot. But it wasn’t just for marrying his nephew: Branson also loves Winslet for rescuing his mother from a deadly fire at his Caribbean island retreat last year.

But it’s probably a good thing that Winslet’s third husband gets to go to space, since he works for the company’s space program as Head of Marketing Promotion and Astronaut Experience.

The couple kept their wedding secret, even from many of their family members, and nobody’s saying where they’re honeymooning. But wouldn’t a trip to space be a great second honeymoon?

Loading more stories
wpDiscuz
0
0
Would love your thoughts, please comment.x
()
x
| Reply
This sure beats a trip to Niagara Falls for your honeymoon, doesn't it?