Brooke Greenberg of Reistertown, Maryland, died last week at the age of 20. Though she was only just out of her teens, Greenberg had already exceeded experts’ opinions about the length of her life. She was a sufferer of the extremely rare Syndrome X, a condition that gave her the mentality and physical appearance of a toddler throughout her life. Greenberg was laid to rest at Baltimore Hebrew Cemetery on October 27, reports The Daily News.

Here’s what you need to know about this little miracle:

Though she stopped really developing at 5, her appearance remained that of a 2-year-old. Her parents, speaking to NBC News, said that from conception her development had been inconsistent.

Brooke was a little on the small side, but nothing abnormal. I mean you couldn’t really tell until you witnessed the birth and you saw Brooke.

As a baby, Brooke would develop one month and then not develop the next, and the following month would play catch-up. This all ended at age 5 when she completely stopped developing both physically and mentally. 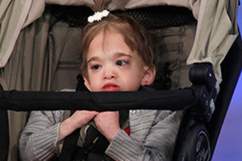 2. Just After Her Birth She Required Surgery

Greenberg’s medical problems were with her throughout her life. She was born one month premature with her hips underdeveloped and dislocated. The pediatrician who helped Brooke, Dr. Lawrence Pakula, told The Daily News that her hips were pushed forward, which resulted in her legs being in an awkward position.

Before being diagnosed with the mysterious Syndrome X, Brooke’s parents brought her to doctor after doctor when they became concerned at her rate of growth. When Brooke’s younger sister began to surpass her, her family became gravely concerned. When they finally got the diagnosis about their daughter’s condition, they were approached by scientists who wanted to study Brooke’s DNA to learn more about human aging. Her father says:

She literally is the fountain of youth if you think about it. She’s shown me that as hard as it gets sometimes, the next day can only get better.

4. Her Family Had Been Warned to Prepare for Her Death Numerous Times

In 2005, Brooke’s mother, Melanie Greenberg, told WBAL, “The older she gets, the more unbelievable it gets.” She added that doctors had repeatedly told her to prepare for the worst. Brooke’s parents had picked out her funeral clothes and casket years ago.

5. Her Passing Has Led to a Flood of Emotional Online Tributes

Rabbi Andrew Busch, who delivered the eulogy at Brooke’s funeral on October 27, told The Daily News:

While the outside world may have noticed Brooke’s physical stature and had been puzzled by her unique development state, she brought joy and love to her family. Her parents, three sisters and extended family showered her with love and dignity throughout her entire life.

On a memorial page for Brooke, the tributes are heart wrenching:

Read More
5 Fast Facts, Breaking News, Deaths, R.I.P.
Brooke Greenberg, who has died at age 20, maintained the appearance of a toddler throughout her life due to the rare Syndrome X.