Tristen Nash is the aspiring musician son of WWE legend Kevin Nash. Father-and-son were arrested together in Florida on Christmas Eve morning following a drunken brawl that included chokeslams.

1. Kevin Nash Has Been Called the ‘Primary Aggressor’ by Police

Tristen’s dad was arrested at the family home in Voluisa County, Florida, on the morning of December 24, reports TMZ. According to the gossip site, Tristen was drunk and began abusing his mother, in front of Kevin. That resulted in Kevin allegedly getting physical with his son, elbowing, and eventually, clotheslining him. Cops were called to the home and arrested Kevin because he was seen as the “primary aggressor.” Around two hours later, cops were called back to the house when Tristen’s mom called 911 claiming her son was attacking her. Police then took Tristen into custody.

The Volusia County Corrections website has already listed the charge that Nash has been taken in for, along with his mugshot:

Tristen is an aspiring musician and his dad has come to his son’s aid at times. In 2011, Kevin took to YouTube to tell those who were posting negative comments about Tristen’s music, “or those that are just haters because he is my kid, f**k you and I hope you wake up with a brain tumor tomorrow.” His full statement read:

For those who have the ability to appreciate my sons talent I say thank you. for those who say he needs voice lessons he is 14 and his voice has not matured yet. For those that are just haters because he is my kid, f*ck you and i hope you wake up with a brain tumor tomorrow. As his career just starts and he grows day by day anyone with appreciation of music would see the growth hes made. if you want to rip my son because you have a problem with me do me a favor and dont wear your seatbelt tomorrrow. Crazy way how god sends assholes through windshields.” Nash also posted, “I see you people running your di*k suckers but i dont see any videos of you doing anything better than what my kid is doing. Dont hate

3. Tristen Nash Is a Poet & Musician

According to his Facebook page, Tristen had been living in Truth or Consequences, New Mexico, and was a native of Scottsdale, Arizona. In the about section of his page he writes:

He also includes a quote from noted athiest Richard Dawkins that reads, “”By all means let’s be open-minded, but not so open-minded that our brains drop out.”

4. He Was Born Just as His Dad Started in the NWO

Tristen is the son of Kevin Nash and his wife, Tamara. Kevin and Tamara had Tristen in July 1996, just as Kevin Nash’s career really began to take off with the New World Order angle in World Championship Wrestling. In a Grantland interview, it says that Tristen was born nine days into Kevin’s WCW contract. Tamara and Kevin were married in 1988 but split in 2000 before later reconciling. The couple live close to Daytona Beach, Florida.

.@WFTV Watch #WFTVat4 I'll have the latest on #KevinNash and the fight w/his son that landed him in jail. pic.twitter.com/d1B4jqmGfE

WFTV in Orlando reports that Kevin Nash wasn’t very helpful with police during his arrest. According to the station he refused to have photos taken of his injuries, telling an officer to “get a subpoena” and he refused to offer a written statement. 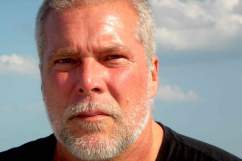 Read More
5 Fast Facts, Breaking News, Crime, Florida, Weird News, WWE
wpDiscuz
4
0
Would love your thoughts, please comment.x
()
x
| Reply
Tristen Nash is the son of WWE wrestler Kevin Nash. He's been arrested along with his dad in Florida after the two had a bloody Christmas brawl that included chokeslams.