A 24-year-old Oregon woman had her 3-year-old daughter in the car when she drove her car onto a sidewalk and into dozens of pedestrians Sunday night on the Las Vegas strip, killing one person, police say.

Lakeisha Holloway was booked into the Clark County Jail. In a press conference at noon, officials said that charges to be filed against her include murder with use of a deadly weapon, multiple counts of attempted murder, a felony count of leaving the scene of an accident which is a non-probational offense, and child abuse/neglect. Additional charges may be filed as more information is learned. She is from Portland.

Police say she intentionally ran her car onto the sidewalk. She had her young child in the car with her when she drove into the crowd, police said.

More than 30 people were injured after the car jumped onto a sidewalk on Las Vegas Boulevard near the Paris Hotel & Casino and plowed into a large group of people at about 6:40 p.m.

1. Holloway Fled the Scene After the Crash & Later Turned Herself in to a Valet Parker

Police say the driver, identified as Holloway, fled from the scene after the crash. Metro Sheriff Joe Lombardo said during a press conference that Holloway left the scene after she hit the pedestrians and drove a few blocks to the Tuscany Casino. She exited, left her toddler in the car, and contacted a valet parker. She told him that she had run over some people on the Las Vegas strip and requested that he call 911. This mugshot of Holloway was shared during the press conference:

Suspect being held without bail until she appears in court. DA's office expediting case. #StripCrash pic.twitter.com/RGV5cUnURg

The crash happened near the Miss Universe pageant. A witness said that she appeared to be looking straight forward and didn’t even seem to be trying to stop the car, CNN reported. During a press conference, officials confirmed that videos also indicate the crash was intentional.

Deputy Chief Zimmerman: This was not an act of terrorism. Initial investigation appears this was intentional. pic.twitter.com/EPxJnmUWdk

UPDATE: Vegas crash Witness tells CNN affiliate KLAS “I saw a lady, she didn’t seem like she wanted to stop the car" https://t.co/zGWOyVfUdm

The friend of another person who was there when the crash happened said on Twitter that their friend was only missed by about two feet after the car ran onto the sidewalk:

Witnesses said they saw men running after the car and yelling at the driver, “Stop! Stop!” Everyone was frantic, but the driver didn’t seem to respond, Fox 13 reported.

Worker from Mexican restaurant just told me woman got on sidewalk, hit 6, got off, sped up, got back onto sidewalk near Paris, hit 8 to 10

Police are saying that the crash was intentional and the driver may have left the sidewalk, returning to hit more people. Holloway was driving a 1996 Oldsmobile, KTNV reported. This was the best picture KTNV could get of the car:

This is the best shot we can get of the car @LVMPD CSI is looking at in parking lot. Damaged windshield @KTNV pic.twitter.com/JXxZcJSOLx

During a press conference led by Lombardo, officials said that Holloway repeatedly drove her car over pedestrian. Some people even jumped on her car and banged on it trying to get her to stop, but she wouldn’t. The victims included people from Quebec, Oregon, Colorado, Florida, Washington, California, and Mexico, officials said. 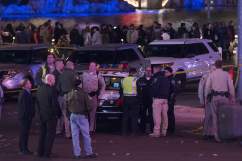 Car Plows Into Pedestrians in Las Vegas: 5 Fast Facts You Need to Know

2. Holloway’s Toddler Was Not Injured & Is In State Custody

Lakeisha Holloway’s 3-year-old daughter was in the car when the crash occurred, police say. (Facebook)

The Las Vegas Police have confirmed that a toddler was in the car with the driver when she ran straight into a crowd of people, Breaking 911 reported.

The three-year-old was strapped into the back of the car, KTNV reported. The toddler was taken to Child Haven and is doing well, officials said.

Holloway’s family members have said that this wasn’t like her at all, Georgia Newsday reported. One of her cousins, LaShay Hardaway, said she was a successful, overachiever and this wasn’t something she would ever do. “Something very tragic must have taken place in her life because this is not her.” Another cousin, Sheria Agum, said that Holloway was a sweet and loving mother who had recently been living in Texas before returning to the West coast. She said around that time, Agum noticed a change in Holloway and she had a completely different attitude when she returned.

3. She Posted a Photo of the Area Where the Crash Occurred to Her Facebook Page

Holloway posted this photo of the area where the crash occurred on her Facebook page in 2012. (Facebook)

In October 2012, she set the above photo as her cover picture on Facebook. The photo is of the area where the crash occurred Sunday night. There was no caption on the photo. In October, Holloway petitioned to have her name changed to Paris Paradise Morton, KGW reported. At the time, she listed Vancouver as her home address. From her name change and her photo, the location meant something to Holloway, but it’s unclear at this time what that meaning was.

According to The Oregonian, Holloway was convicted of operating a vehicle without driving privileges and driving uninsured in December 2011. The arrest occurred in Multnomah County, Oregon.

It does not appear that she had any other arrests in her home state.

4. Holloway, Who Was Homeless and Living in Las Vegas for a Week, Had Once Won a Role Model Award From a Portland Charity

Holloway has been homeless more than once. During a press conference, Metro Sheriff Joe Lombardo said that she had been in Las Vegas for a week, homeless and living with her child out of her car.

Holloway was homeless at least once before, during her freshman year of high school and had to fend for herself, an Oregon newspaper, The Skanner News, reported in 2012. Her mother was addicted to alcohol, she told the newspaper.

The article was about Holloway receiving a CARE Role Model from a local charity that assisted her during school. Holloway, who went on to graduate from high school with the help of the Portland Opportunities Industrial Center, was pursuing a career in the forest service at the time of the 2012 story.

According to her Facebook page, she studied at Portland Community College.

5. Holloway Has Shared Her Motives With Police & “Didn’t Appear to be Distressed” Because of Her Actions

In a press conference today at noon led by Metro Sheriff Joe Lombardo, officials said that Holloway did tell them why she ran down the pedestrians, but because the investigation is ongoing they aren’t comfortable releasing the information to the public yet. He said that she was “very stoic” at the time of the event and “she didn’t appear to be distressed due to her actions.” No alcohol was found in her system, although she may have been taking some type of stimulant, 3 News reported.

According to NBC KSNV, Holloway told police “I am hurting, and I want others to feel pain!”

Officials also said during the press conference that Holloway appeared to have some “disassociation” with the father of their child. They believe the father may live in Dallas, Texas, and Holloway was trying to get back to Dallas via Las Vegas.

Officials said they are having trouble getting a complete background on Holloway, but they don’t think terrorism is involved — although they can’t rule it out completely yet. The statements she gave to the police do not indicate any connection to terrorism. The incident also wasn’t correlated with New Year’s Eve, they said.

Clark County Jail records show that she is being held until a hearing at 7:30 a.m. on Tuesday, where they will decide if there’s probable cause to continue to hold her. Earlier reports indicated that bail had been set for Holloway, but so far that is not the case. Because one of her charges is murder with a deadly weapon, she will be held without bail until the hearing. 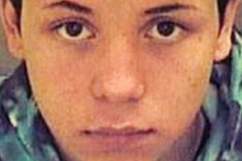 Loading more stories
wpDiscuz
102
0
Would love your thoughts, please comment.x
()
x
| Reply
Lakeisha Holloway has been named as the driver accused of causing the horrific crash on the Las Vegas Strip. One person was killed and 37 were injured.