Mika Brzezinski, the co-host of Morning Joe, is from a prominent political family that saw the apex of its power during the Jimmy Carter administration.

Brzezinski is in the news after President Donald Trump responded to her criticism of him (for example, she said he was on the path to dictatorship) by calling her names on Twitter and accusing her of bleeding from a facelift. The president’s comments have been met with cries of sexism. Brzezinski responded by tweeting a photo of a Cheerios box and small hands, a knock at past reports that Trump is upset because some people think his hands are small.

Specifically, Trump wrote, “I heard poorly rated Morning Joe speaks badly of me (don’t watch anymore). Then how come low-IQ, crazy Mika, along with Psycho Joe, came to Mar-a-Lago three nights in a row around New Year’s Eve, and insisted on joining me. She was bleeding badly from a face-lift. I said no!”

This all has people wondering about Brzezinski’s family.

If Mika’s last name sounds familiar, it’s because her father was one of the country’s most prominent political figures during the administration of Jimmy Carter.

She is the daughter of Zbigniew Brzezinski. At the time of her 1993 first wedding, The New York Times reported that her father, “who was President Jimmy Carter’s national security adviser, is a counselor at the Center for Strategic and International Studies and a professor at the Nitze School of Advanced International Studies at the Johns Hopkins University, in Washington.”

Her mother was a sculptor, according to The Times. Emilie, who was born in Geneva, is well known for her unique, large sculptures using wood. In addition to Mika, they had two sons, one who worked in the George W. Bush administration, and one who worked in Barack Obama’s.

When he died at age 89, The New York Times memorialized Zbigniew Brzezinski, the son of Polish aristocrats, as a “hawkish strategic theorist.”

This is one of Mika's favorite pictures of her and her dad. They're on the White House lawn. pic.twitter.com/6BYWM8hfS7

The newspaper described Brzezinski as “nominally a Democrat” whose hatred of the Soviet Union put him to the right of even some Republicans on that issue. He was Carter’s adviser during the Iranian hostage crisis. According to The Times, Zbigniew Brzezinski supported “billions in military aid for Islamic militants” fighting the Soviets in Afghanistan and “tacitly encouraged China to continue backing the murderous regime of Pol Pot in Cambodia” to thwart the Soviet-backed Vietnamese. He was not a fan of Donald Trump.

When Zbigniew Brzezinski died in May 2017, Mika wrote an ode to him on Instagram: “My father passed away peacefully tonight. He was known to his friends as Zbig, to his grandchildren as Chief and to his wife as the enduring love of her life. I just knew his as the most inspiring, loving and devoted father any girl could ever have. I love you Dad #HailToTheChief.”

According to CNN, Brzezinski “also served as foreign affairs adviser to Presidents John F. Kennedy and Lyndon B. Johnson and “was awarded the Presidential Medal of Freedom for his role in the normalization of US-China relations.”

Dr. Brzezinski fought tirelessly to bring freedom to his homeland of Poland. He was a fierce Cold Warrior against Russian aggression. ?? ?? pic.twitter.com/E6mEtt52MS

Scarborough also posted a tribute to Brzezinski when he died, writing, “Dr. Brzezinski fought tirelessly to bring freedom to his homeland of Poland. He was a fierce Cold Warrior against Russian aggression.”

2. Mika Has a Daughter, Emilie, With Her Ex-Husband

Mika Brzezinski was married before, to Jim Hoffer (they divorced in 2016).

They have two children together. One of their daughters is named Emilie Hoffer. According to Emilie’s LinkedIn page, she is a student at John Hopkins University.

Emilie’s page says she is the sports editor for her college newspaper as well as a marketing intern for Global Citizen in New York.

She also served as a summer intern for U.S. Senator Elijah Cummings, a Democrat from Maryland. Emilie is a political science major at John Hopkins. In high school, she was a member of the Young Democrats and ran Varsity cross country.

Emilie is the first name of Mika’s mother. 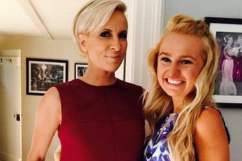 3. Mika’s Second Daughter, Carlie, Was an Intern on Her Mother’s Show

Her LinkedIn page says she has worked as an intern for Milly in New York City, for The Morning Joe, and for Spotify.

Carlie Hoffer, like her sister, graduated from Bronxville High School.

Brzezinski was married to Hoffer, her first husband, since 1993. In 2016, it was revealed that Mika and Hoffer had reached a settlement in their divorce.

5. Brzezinski Is Now Engaged to Scarborough After She Couldn’t Deny Her Feelings Anymore

Mika Brzezinski and Joe Scarborough have since confirmed months of rumors by admitting they are in a relationship.

In fact, they have now revealed they are engaged. Vanity Fair reported that the pair “have long been known for their highly flirtatious office-spouse badinage, squabbling and then making up. In some ways, they were an odd couple: Republican former Congressman with daughter of Jimmy’s national security adviser; red-state quarterback live on air with a D.C. heiress.”

Brzezinski told Vanity Fair, “Over the past year and a half, I realized I had to face these feelings and that it was time to stop putting them in a box. It was not an easy process and it was not an easy set of decisions for either of us. It was something I couldn’t deny anymore.”

Scarborough has been married and divorced twice. Brzezinski was married to Hoffer for 23 years.