Tina Frost, a 27-year-old Maryland woman known for her bubbly personality and vibrant smile, is fighting to recover after a bullet from madman Stephen Paddock lodged in her eye during the Las Vegas shooting attack.

Frost, of Crofton, is one of the more than 480 people wounded in the rampage, which was the worst mass shooting in modern U.S. history. Fifty-eight people had died in the attack as of October 6, according to the official coroner’s account.

Paddock staged the attack on the Route 91 concert from the 32nd floor of the Mandalay Bay hotel. The young woman, who now lives in San Diego, has moved strangers and loved ones alike as they follow her family’s chronicling of her recovery on social media. A GoFundMe site in her name has raised almost half a million dollars.

Tina made hopeful progress, according to an October 12 update from her family.

1. Frost Was Shot While Attending the Concert With Her Boyfriend

Frost had moved from Maryland to San Diego, and “drove to the concert with boyfriend Austin Hughes, who was uninjured,” according to Fox News.

“I Snapchatted her that I was jealous that she went,” her sister Becky Frost said to The Baltimore Sun.

Described as “bubbly and charismatic,” Tina was standing at the concert when Stephen Paddock opened fire on the crowd for unclear reasons. “Tina Frost’s boyfriend, who was not hurt, told the family that she was conscious after she had been struck,” The Sun reported. “The couple got separated when Tina Frost was taken to a hospital, and the boyfriend spent several hours looking for her before he learned she was in surgery.”

The injuries were severe because a bullet had lodged in her eye.

CNN reported that Tina is in a coma and on a ventilator.

Dr. Keith Blum, a neurosurgeon at the hospital treating Frost, told CNN that, while there is hope, “the recovery may not be easy or fast for Tina, who is now in a coma and breathing with a ventilator. Frost also lost her right eye that night.”

“Unfortunately, some people may not ever recover. In some of the people I would say, give it a year,” he said to CNN.

2. Frost’s Father Is Detailing Her Recovery on Facebook, Calling It ‘Her Marathon’

On October 12, the family provided the most hopeful update yet via GoFundMe. They wrote:

“Update from Mary-
10/12 – Tina is continuing to amaze us! Yesterday, she sat in the recliner for 6 hours and was breathing on her own for 2 hours. We also continued to brush her hair out – it’s now in two nice, neat braids!

10/13 – Today has also been a big day for our TT – she is now waking up! She opens her left eye just a lil and looks all around the room at us, taps her feet whenever music is playing, continues to squeeze our hands, and even gives Austin a thumbs up when asked. She sometimes taps to music and also took her first steps today with the assistance of the nurses – 3 steps to the chair and 3 steps back to the bed. She’s obviously anxious to get her wobble back on. She also breathed on her own for a full 6 hours! We are so proud of our Tina, and everyone is amazed at every single movement she makes. EY San Diego sent a colorful RARE Science teddy bear that she hugs and pats on the back to show us she likes him :). The Jabbawockeez (won America’s Best Dance Crew) paid her a special visit today in her room and they also put on a little show for the hospital.

The doctors have been talking about Tina’s next steps and are discussing other hospitals that will have all the specialists she’ll need during her long road to recovery. She will be moving ICU to ICU, so the whole team will be on track with her recovery. Dr. Blum, Tina’s Neurosurgeon here at Sunrise is making sure that the facility Tina will be at next meets all the requirements she will need, both short term and long term and all the surgeries she will have over who knows how long. We’ll know more soon about where we will be next. Thanks for all the thoughts and prayers!”

On October 5, Rich Frost, Tina’s father, wrote on Facebook that she was doing better.

“Tina’s third night in ICU has been her best. Small, but critical steps, in her marathon. A more extensive update from the family to follow later. Thanks for everyone’s tremendous support!!!” he wrote.

On October 3, Rich Frost wrote, “Tina had a good night with her mother and I by her side. Vitals and responses are good, no fever and she is fighting hard. When they have to move her, she sits up on her own, rolls herself and pushes the nurses away. She calms down when we say ‘easy Tina.’ Her eye is swollen shut and she is on the ventilator and still in her coma, but it is encouraging.

Keep the prayers coming, we have faith that good things will come, but they keep warning us on that brains are unpredictable and this is more of a marathon than a sprint. Tina is a great runner and very strong!

Ps. Don’t feel the need to comment or acknowledge every update by any means. Your kind words and prayers are already enough to help us keep the faith, and have been greatly appreciated.”

On October 2, Tina’s father shared his other daughter’s post. He wrote:

Tina’s vitals are stable. They removed her right eye, where the bullet was lodged, and there is an implant there now to keep the space open. She has sight in her left eye but will never see from the right again. They took out a bone from her forehead to allow the brain room to swell, that will stay out for a few months. She’s in a coma and on a ventilator, she cannot breathe on her own. She’s critically stable in ICU for at least a week. Over the next few days, they’re going to see how she responds to simulation, but until then, we won’t know how bad the brain damage is. We appreciate everyone reaching out, we know your hearts are with us, I’m sorry I can’t respond to everyone, so just wanted to update you all on here.”

Rich Frost also wrote, “Thanks everyone for the prayers! After several hours of surgery, she is stable for now and in ICU. Her Mom, sister and step-sister should be able to visit her shortly and I am about to take off for Vegas myself. We appreciate all your love and prayers, but ask that you be patient and understanding over the next few days as we be there 100% for Tina! Thanks!”

There is a verified GoFundMe page dedicated to Tina Frost. As of October 6, it had raised more than $412,000.

Pam Clark created the page. She wrote, “A good family friend, Tina Frost, was injured in the mass shooting in Las Vegas on October 1st.”

Wrote Clark: “We are raising money to cover all expenses related to this tragic event such as traveling, food, hotels, missed work, and caring for Tina.”

An update reported on October 5, “Thank you all very much for your prayers, love and support for Tina Frost and her family. It’s such a blessing to see a community come together to help. Please continue to share as this is going to be a very long road to recovery and all the support will help.”

Tina’s mom provided another update. It read, “Today we saw a couple of good things. Her catscan showed no increase of swelling in her brain from yesterday and her low-grade fever subsided; she has maintained a healthy temperature and vitals all day and they have started her on a feeding tube. When the nurses switch her bedding and have to move her, or do a ‘suction’ from the tube in her mouth which is uncomfortable, Tina puts up a good amount of resistance showing us she’s still in there and she’s fighting! There’s hope to lower the amount of ventilator support to test if she can breathe on her own but that depends on how she does through the night. The doctors explicitly expressed to us that it is very common for head trauma patients to have a recovery that ebbs and flows; we may see improvement one day, then none the next. Once again, we are overwhelmed and grateful for the outpour of love and support we have received.”
Help spread the word!” 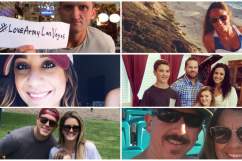 4. Tina Is Described as Bubbly & Was a High School Athlete & Lifeguard

One woman wrote on Facebook that Tina and her sisters are “Beautiful young women, who were amazing athletes that always showed great sportsmanship.” Anne Arundel County High School wrote on Facebook, “One of our former students, Tina Frost, Class of 2008, was one of the people injured in the shooting. Tina was on the soccer team while at Arundel and was on the All-County team in 2007. Tina had surgery this morning and is currently in ICU in a coma and on a ventilator. She lost her right eye and they are unsure if she has sustained any brain damage. Her family has flown out to Las Vegas to be with her. Arundel High School will be collecting money for the family in their time of need. ”

Another woman wrote, “Tina is one the nicest people I have ever met and life was so unfair to her last night. Please send your prayers to her and her family.”

Another woman who knows Frost wrote, “As if the news of the Las Vegas tragedy wasn’t scary, confusing and sickening enough. it really hurts my heart to know that such a sweet, beautiful, smart girl, a lifeguard I used to work with has been among the severely wounded. Tina we are all rooting for you to pull through.”

Tina Frost with her mother.

Tina might have died were it not for the quick intervention of an unidentified man known as “Shane,” as well as Tina’s boyfriend. Tina’s mother told CNN that she wants to thank this man.

According to CNN, Mary Moreland “says Shane helped Frost’s boyfriend, Austin, carry her to a pickup truck, holding his shirt on her eye as they sped to the hospital. Once they arrived, the man, still unidentified, placed her in a wheelchair before she was taken away.”

Asked what she wanted to say to Shane, Moreland said on CNN, “Thank you for saving my daughter’s life.”

Loading more stories
wpDiscuz
0
0
Would love your thoughts, please comment.x
()
x
| Reply
Tina Frost, a San Diego woman fighting to recover after being shot in the eye in the Las Vegas shooting, is from Maryland. Facebook photos show a vibrant smile.