YouTube/Andrew Gillum R. Jai Gillum is the wife of Andrew Gillum, who is currently running for Governor of Florida.

R. Jai Gillum is the wife of Mayor Andrew Gillum, who is  running for governor of Florida in one of the most contested gubernatorial races of the year. According to Tallahassee Magazine, R. Jai Gillum is an executive director of United Way of the Big Bend’s The BEST Project, which “helps people achieve long-term financial stability and quality of life through services such as tax preparation help.”

Gillum is one year older than her husband. When he proposed, he reportedly asked her to be his “life partner” rather than his “wife.”

According to The New Yorker, the power couple first met while participating in student government at Florida A&M, though they wouldn’t date for several more years.

To Tallahassee Magazine, Andrew Gillum revealed that he first flirted with her by penalizing her for wearing a “short skirt” to student government, but she wasn’t pleased by that. They reportedly met again in 2003, and Gillum gave her his home phone number, which R. Jai Gillum promptly ignored. She said, “I didn’t think he was serious. He was wearing both of his cell phones, and then he gave me his home phone number. I said, ‘Anyone with two cell phones is never at home.’”

The Gillums were finally arranged by mentors from college, according to Tallahassee Magazine, and their first date took place at Bennigans, which they now refer to as “the first date that never ended.”

R. Jai currently runs the Foundation for Florida Dental Association. To First Coast Today, she said that her largest platform as first lady of the state of Florida would be to address what she believes are the two biggest “unmet health needs” for the people of Florida: dental issues and mental issues.

As Gillum’s campaign for governor has begun to near the final election, R. Jai has become more outspoken about her husband’s campaign. To First Coast News, she said of her husband’s rallies, “I look out into the audience and it’s so diverse and there are multiple people in tears as he’s speaking, and that was a sobering moment for me. I teased him. I said it was like being at a Michael Jackson concert and then I laughed.”

She added. “On November 6 we don’t want tears and people feeling like we didn’t do all that we could do but also knowing that we’re carrying a lot of hopes and dreams for a lot of other folks and we just want to do right by them as much as we can.”

3. Andrew Gillum Describes His Wife as ‘the Epitome of Grace’

In a video titled “Meet Florida’s Next First Lady, R. Jai Gillum,” Andrew Gillum said of his wife, “R. Jai is, I think, the epitome of grace, really in all ways. And I’ve known that about her from the very, very beginning. I think she cares deeply about not only our family, but she cares deeply about any causes she’s ever been involved with.”

As for his wife, she seems to reciprocate that respect and appreciation for her husband. To First Coast Today, R. Jai noted that her husband did confer with her before deciding to run for governor, but that she never would have stood in his way. She said, “We did have some conversations about, ‘well what do you think about governor?’ And I was pregnant at the time so it was a fun conversation.”

She added, “I appreciated that he asked me but I also knew it wasn’t a question for me to say no to. I think that Andrew is destined to do what he’s doing. I would have never forgiven myself if I stood in the way of that.”

When asked about her husband’s role as a father, R. Jai Gillum said, “Andrew is a really great dad, he’s making sure that this campaign doesn’t affect our family time and our family life.”

R. Jai also described her husbands dance moves, she said, “He’s a great dancer! He’s a better dancer than I am.”

Gillum continued later in the video, “People are realizing that, ‘Time’s up,’ we got to do something different. And I think there’s at least an ear for those different ideas.”

R. Jai and Andrew Gillum have two twins together named Caroline and Jackson. Prior to their marriage, Andrew Gillum’s proposal was intended to be straight out of a fairytale, but to Tallahassee Magazine, he revealed that it didn’t exactly turn out that way.

Gillum said, “There was this one place, Larson Family (Winery), where you could horseback ride through the vineyard. So I convinced her that we were going to go here and take a horseback ride. The guy (was) there in advance and had set up a table and two chairs with some wine out in the vineyard. The horses were so familiar with a certain route that when they got out there and saw the tablecloths, the horses freaked out.”

At that, point, R. Jai realized what was going on. Gillum said, “I got down on one knee and asked her if she would be my life partner. She said yes.”

The couple has reportedly had some issues with conceiving children, but R. Jai finally gave birth to the twins on May 19, 2014. Then, in May 2017, they announced the birth of a baby boy, Davis Allen Gillum.

To First Coast News, R. Jai talked about the challenges she faced spiritually when she struggled to conceive. She said, “Something like this really tests your faith. We were able to get pregnant and experienced four miscarriages. Three in one year so that was a really tough experience.” 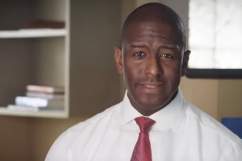 Andrew Gillum on the Issues: 5 Fast Facts You Need to Know

Loading more stories
wpDiscuz
0
0
Would love your thoughts, please comment.x
()
x
| Reply
R. Jai Gillum is the wife of Andrew Gillum, who is currently running for Governor of Florida.