The Kingdom Hearts fanbase is one of the most loyal and ardent fans in the world. They flood every gaming website at least 10 times a day just so they can see any new information on a new Kingdom Hearts game.

This past E3 was surely pleasing to all the KH fans who’ve been craving another console entry, since Kingdom Hearts 3 was announced during Sony’s media briefing. After playing the PS2 and portable entries in the series, we’ve journeyed to plenty of Disney-themed worlds.

We have a good feeling that Kingdom Hearts 3 will let players return to Disney’s most popular worlds, but we’re more excited about traveling to some new ones. Disney owns a bunch of other entertainment properties (Marvel, Star Wars etc.), but we’ll just stick to Disney’s film ventures for this countdown.

These are the top 10 Disney worlds that need to be a part of Kingdom Hearts 3.

10. The Princess and The Frog

The setting and atmosphere of this 2009 animated film was incredible thanks to the movie’s location – New Orleans. New Orleans is full of wondrous cultural elements that found themselves being represented within this animated feature. Kingdom Hearts is already filled to the brim with elements of magic and flashy effects. We can just imagine how much more fantastical those parts of the game will be if it takes place in the world of The Princess and The Frog. We think it would be pretty sensible if Sora was tasked with helping lead princess Tiana transform out of her frog form. The wild, party atmosphere would provide a colorful backdrop for more of Sora’s new wordly travels. A huge boss fight against witch doctor Dr. Facilier would be the perfect end to the mission within this world.

Treasure Planet is one of Disney’s more often-ignored animated movies. Folks recognize movies such as The Lion King, Aladdin and Snow White. But if you mention Treasure Planet to a non-hardcore Disney fan, you’ll probably elicit a few blank stares. That’s just not right, because Treasure Planet is a wonderful 2D/3D movie experience. The mix of traditional pirates and planetary discovery led to this film adopting a nice set of revolutionary visuals. We’d love to join Jim Hawkins on his space adventure as he faces off with rival pirates and space mercenaries. Sora could even involve himself in some playable pirate ship battles…IN SPACE! How cool does that sound? Disney needs to pull this film out of the vault and let Square Enix dust it off for KH3.

The Emperor’s New Groove is one of Disney’s funniest films. David Spade’s humor is usually pretty hit or miss, but it was most certainly a hit here. The Inca Empire scenery would translate really well to the next-gen graphics for KH3. The large monuments, intricate wall paintings and traditional garb worn by the denizens of this film’s world would freshen up the KH experience. Teaming up with Kuzco in his llama form and his loyal buddy Pancha sounds like an awesome team-up to us. Fending off black panthers and Yzma’s huge henchman with a new Keyblade is exactly what we’re looking to do. We just hope the humor of this franchise stays intact for its inclusion in the game.

We’d love to go under the sea in Kingdom Hearts again…just not there (hated those music mingames). Anyway, Disney created a movie that took the viewing audience underwater to the depths of the ocean and into the lost city of Atlantis. Atlantis: The Lost Empire featured your usual ragtag group of underwater specialists who were looking to discover Atlantis. Atlantis looked grand on the big screen during its 2001 debut. Square Enix could do right by this overlooked Disney film by having Sora link up with with Milo Thatch and his crew for another Atlantis expedition. Hey, maybe Milo’s love interest (Kida) needs help against another group of mercenaries. Sora and his Keyblade kung-fu could aid in the battle for the underwater empire. A volcanic eruption could mark the perfect world outro for a boss fight for this Disney locale.

Disney has enjoyed a long, healthy relationship with Pixar. Pixar has crafted some of the finest, most emotionally touching 3D animated films ever seen. The Incredibles just happens to be one of the films that can be considered as Pixar’s best. We hope and pray KH3 features a stronger Pixar presence, which means we’re looking to play inside the superhero world of The Incredibles. The sight of Sora in his own custom-made superhero outfit sounds too cool just to pass up. A Keyblade shaped in the form of The Incredibles costume logo would be pretty cool, too. Taking on Syndrome and his villainous army would an intense experience if we were able to fight alongside the film’s super-powered family. This franchise inclusion needs to happen!

Disney’s Tarzan got shown some love from the Kingdom Hearts series. We were definitely cool with that, but we were kinda puzzled by the exclusion of another jungle-based Disney movie – The Jungle Book. Mowgli and his group of animal companions would present a super lighthearted environment to traverse through. We have a good feeling that a musical number would play a part in this world, but we know we’d enjoy it more than The Little Mermaid minigames. Don’t front! A smile would erupt on your face and you’d have a great time playing a music minigame centered around “The Bare Necessities.”

Okay, so its pretty common knowledge that Disney has a large collection of iconic animated movies. But most kids of the 80’s and 90’s have a stronger connection to Disney’s animated cartoon series. We’d love to see Kingdom Hearts stray away from the big films and move onto adopting the worlds of Disney cartoons. One of those cartoons is TaleSpin. The colorful characters that make their living as air cargo freight operators are all lovable. We’d have an amazing time if Sora was allowed to hop on a few airplanes and fend off the sky pirates taking aim at Baloo and his crew. Facing off with Don Karnage and plenty of other anthropomorphic animal pirates is just what KH needs.

Here’s another Disney cartoon that would make a perfect fit for Kingdom Heart’s explorable worlds – Darkwing Duck. The list of memorable characters in this series means this world would be chock full of personality and extreme nostalgia. Seeing Sora adopt a similiar superhero suit based on Drake Mallard’s alter-ego would be too awesome! There’s plenty of bad guys to keep at bay (Negaduck, Megavolt, Quackerjack etc.) and allies to team up with (Comet Guy and GizmoDuck FTW!). The addition of this world gets our inner 5-year-old so excited.

Let’s be honest with ourselves here – Toy Story should already have been included as a separate world in Kingdom Hearts. Woody and the interplanetary hero Buzz Lightyear are two allies that Sora could be unstoppable with. Jumping around Andy’s bedroom as a miniaturized version of Sora is something that sounds incredibly fun. All those building blocks we’d get to climb and all those evil toys that Sid owns could make for some entertaining diversions in this world. A level based on the Pizza Planet claw game machine is also something that sounds uber fun to us.

A Disney movie based on video games HAS to get a piece of the pie in a game that features Disney franchises! Wreck-It Ralph included so many awesome nods to old school gaming and current day video games. The story of Wreck-It Ralph and his aspirations to be a good guy in the world of video games is a great plot device for Sora’s new adventures. We know there won’t be a bunch of other video game character cameos (that sounds like a licensing nightmare!), but we’re fine with that. As long as we get to race in the world of Sugar Rush and cut up a few aliens in Hero’s Duty, everything’s just fine. The inclusion of Wreck-It Ralph is our number one choice for a Disney world that needs to be playable in Kingdom Hearts 3. 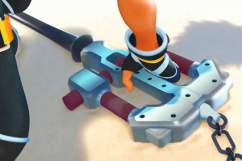