The Keystone XL Pipeline is a project to extend the existing Keystone pipeline, which carries heavy crude oil from the oil sands of Canada to U.S. refineries. It was approved by the Republican-controlled House on November 14, and will now proceed to the Senate.

The current pipeline reaches to Cushing, Okla., Wood River and Patoka, Ill., and Texas’ Gulf Coast. The proposed Phase IV, Keystone XL, would begin in Alberta and extend to Steele City, Neb., essentially replacing phase I of the existing pipeline with a more direct route.

The project has been politically fraught, with debate over the pipeline now entering its sixth year. The Senate will vote on Tuesday, and from there, if passed, the proposal will go to President Obama for consideration.

He has to date delayed making a call, citing on ongoing State Department review, but it seems likelier in recent days that he may veto the proposal.

Here are the pros and cons to the controversial proposal:

Pro: Its Supporters Say it Would Create Thousands of Jobs 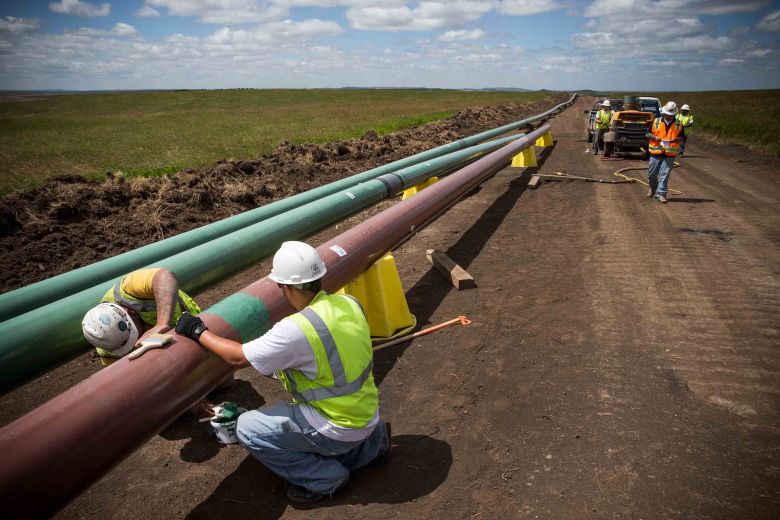 There is no clear consensus on the number of jobs that the pipeline would create. TransCanada, the company behind the pipeline, says “It would create 20,000 jobs: 13,000 in construction, 7,000 in manufacturing.”

The U.S. State Department, meanwhile, said in a March 2013 report that the pipeline would create 42,000 jobs through both direct and indirect employment.

President Obama refutes both of those claims, saying in July 2013,

“There is no evidence that that’s true. The most realistic estimates are this might create maybe 2,000 jobs during the construction of the pipeline, which might take a year or two, and then after that we’re talking about somewhere between 50 and 100 jobs in an economy of 150 million working people.”

Con: It Could Contribute to Global Warming, Which May Damage GDP 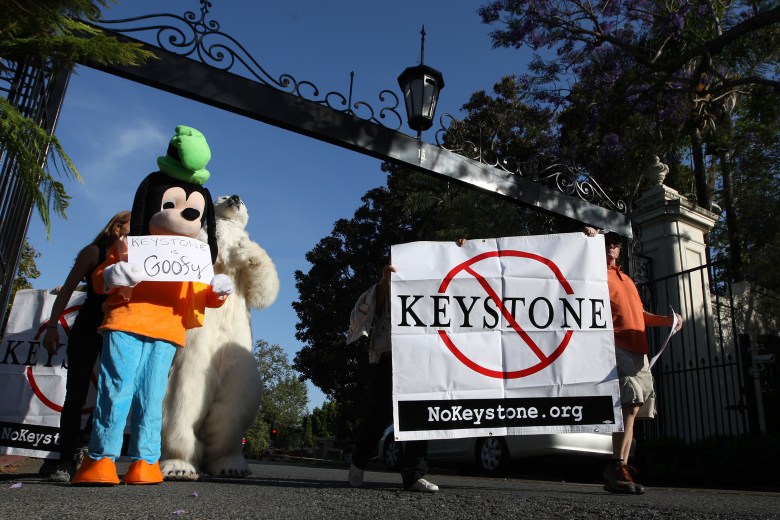 “This will create other economic activity. This will ripple out through the economy,” said GOP Rep. Bill Cassidy, the sponsor of the House bill, echoing the feelings of those who think the project would benefit the economy.

However, his opponents say that the ripple effect could have a negative effect, with the environmental impact of the pipeline contributing to the global warming that environmentalist groups say could reduce U.S. GDP by up to 2% in the next century.

Pro: It May Increase Energy Security for the Gulf Coast 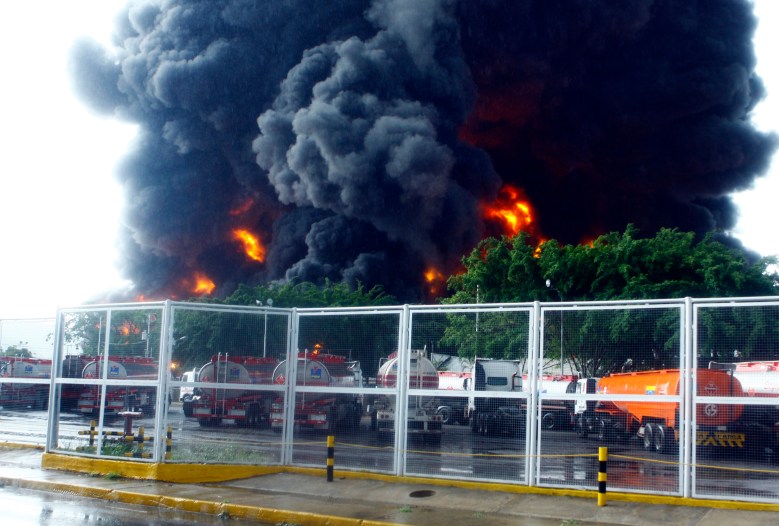 A Venezuelan refinery in Guaraguao, 220 km east of Caracas, after a fire broke when a lightning struck a treatment pond. (Getty)

A benefit of the pipeline is its geo-politically stable position in comparison to other sources of oil being used. It would allow sustained use of oil from Canada, a stable and neighborly trading partner.

Much of the oil being processed in the Gulf refineries now comes from Venezuela or the Middle East, who are less reliable as trading partners than democratic, politically stable, and prosperous Canada.

Con: It May Be Environmentally Damaging 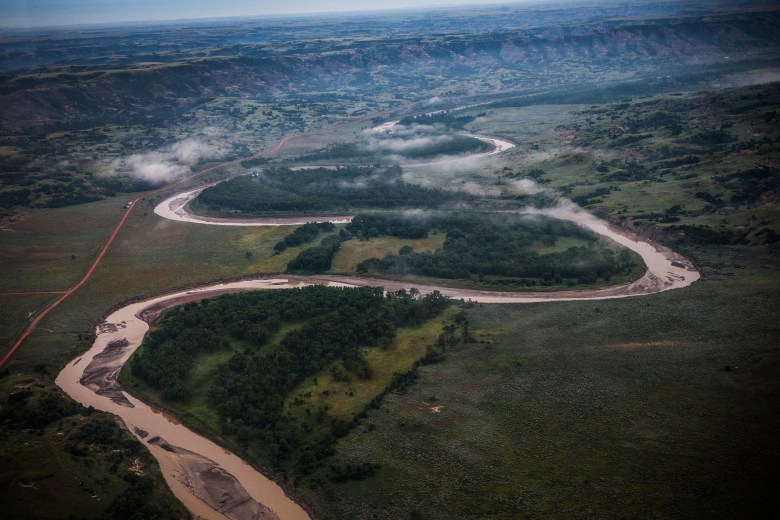 The Missouri River and the Badlands region, seen in an aerial view. (Getty)

The pipeline would have a number of risk factors for a spill or contamination situation. It would travel through areas that are known to have seismic activity, which could increase the risk of a pipe failure.

The tar sands oil is highly corrosive, and some environmental groups say this makes erosion and failure of the pipes that carry it more likely.It also sinks rather than floats, making clean-up extremely difficult in the case of a spill.

Concern about this has focused on the water sources in the areas the pipeline would travel through, including the Missouri, Yellowstone, and Red Rivers.

Green groups are also concerned about the effect of the pipeline on wildlife in the areas it crosses and the air quality in neighborhoods around the refineries.

Pro: It Is Safer Than Other Transport Options 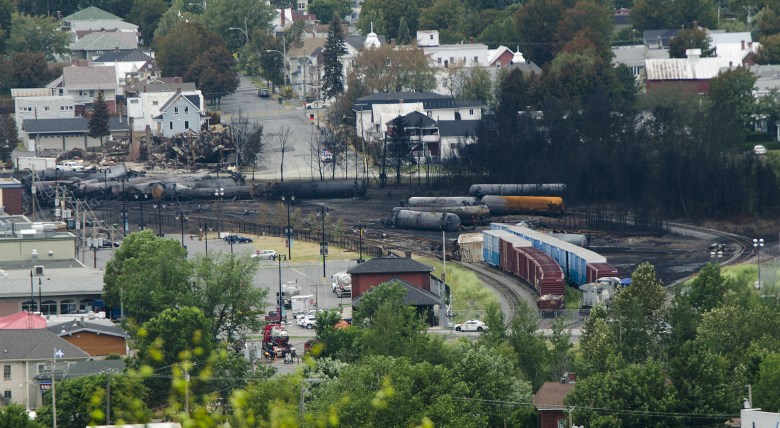 If the Keystone XL pipeline is not approved, Canada’s tar sands oil will most likely make its way through the U.S. to refineries in other ways.

This is already happening, mainly by rail, and these links could be expanded to replace the pipeline. Transporting oil by rail is more hazardous than pipelines, and more spills have happened in the last year than in any other years on record.

Last year, 47 people were killed in Quebec when a tanker-train derailed, spilling crude oil that ignited and destroyed much of the town of Lac-Mégantic. That train was carrying crude from the Bakken formation.

Con: Some Argue That Focus on Sustainable Projects Would Create More Jobs 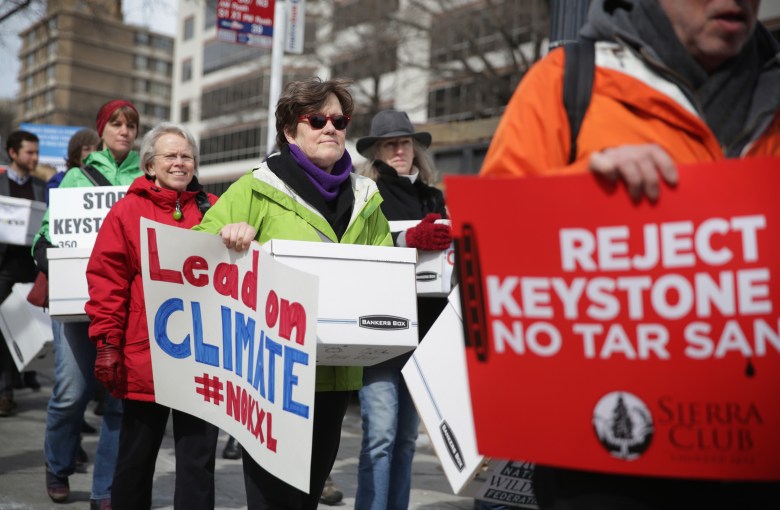 Activists carry signs and petition boxes as they march to the State Department for a rally to protest against the Keystone XL pipeline March 7, 2014 in Washington, DC. (Getty)

A report by the Political Economy Research Institute at the University of Massachusetts, Amherst, said that a short-term green stimulus package of $100 billion dollars would create “nearly four times more jobs” than spending the same amount of money on the oil industry.

Keystone XL’s emissions are equivalent to adding more than 5.6 million new cars to U.S. roads, and activists argue that investing money for this project into more environmentally friendly projects would be beneficial in the long-term future.

High-profile environmental activists wrote a letter to Sec. of State John Kerry in 2013 advocating for a rejection of the pipeline, saying,

“We believe in the power and promise of climate solutions. We know they work; we know they are economically viable; and we know we can implement them.”

Loading more stories
wpDiscuz
2
0
Would love your thoughts, please comment.x
()
x
| Reply
The Keystone XL pipeline has just been approved by the House, and will now move to the Senate. Here are the facts, maps, pros, and cons you need to know.