Tensions continue to mount across the country with the latest incident occurring in Boston. The above video shows a woman waiving an American flag in anticipation of the Free Speech Rally held at Boston Common.

Here is the NBC News account of some of the counter-protests happening in Boston:

The counter-protesters gathered near Boston’s Malcolm X Boulevard, chanting ‘Whose streets? Our streets!’ and ‘No Trump, No KKK, No Fascist USA.’ They also held signs that read: ‘Resist,’ ‘Black Lives Matter,’ and ‘Get the hell off my lawn, you bigots.’

“We are a coalition of libertarians, progressives, conservatives, and independents and we welcome all individuals and organizations from any political affiliations that are willing to peaceably engage in open dialogue about the threats to, and importance of, free speech and civil liberties,” the event page notes.

ANSWER (Act Now to Stop War & End Racism) is one of several counter-protest groups who showed up in response to the rally. ANSWER described the gathering on their website:

Stand for Solidarity is a counter demonstrative rally in response to the August 19th “Free Speech Rally” called by a coalition of white nationalist organizations. Our coalition believes that it is crucial to not only vocally oppose these grass-roots led, far-right mobilizations, but that local communities must unite to resist the ways that white supremacist ideologies are validated, re-enforced and perpetuated by legislation and policy on a state and local level…This coalition does not advocate for the use of violence as an offensive tactic during this demonstration. We respect the bodily autonomy of individuals to defend themselves if physically attacked.

The organizers of the original event noted on Facebook that they are not affiliated with the groups who marched in Charlottesville.

While we maintain that every individual is entitled to their freedom of speech and defend that basic human right, we will not be offering our platform to racism or bigotry. We denounce the politics of supremacy and violence. We denounce the actions, activities, and tactics of the so-called Antifa movement. We denounce the normalization of political violence…

The woman holding the flag in the above video shared her story in an interview on WRKO 680’s The Kuhner Report. In the interview, she detailed being spit on, punched and kicked during the rally. Click here to listen to the interview. 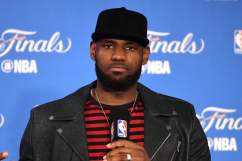 Charlottesville Shows We Need LeBron & Athletes Not to Stick to Sports